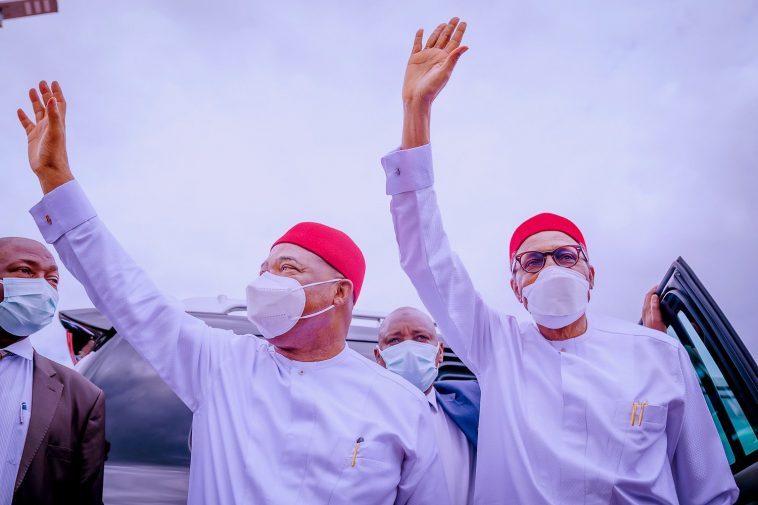 President Muhammadu Buhari has heaped plaudits on Governor Hope Uzodimma of Imo State for his tenacity and prudent management of scarce resources which enabled him to record overwhelming achievements within a short period in office.

President Buhari made this assertion in his address at the Banquet hall of Imo State Government House, Owerri, after commissioning; the Owerri-Orlu Road, Owerri-Okigwe Road (Phase 1), and the renovated Imo House of Assembly Complex, which he said was three out of the fifty projects presented to him for commissioning by Governor Uzodimma.

He said with such intimidating achievements and judging by the fact that he has been to the state two times within one year to commission projects, other state governors may be afraid to invite him.

“Having known that I have been here twice and considering my honest comment on what I saw, not what I heard, maybe they are not prepared to invite me and I don’t mind not being invited.

He enumerated some critical infrastructures provided by his administration to include; Deep Seaport, new airport terminals and buildings, railway projects, network of gas and power infrastructure, roads and bridges, including the second Niger bridge, telecommunication infrastructure, among others.

“I am therefore happy that the APC government led by Governor Hope Uzodimma is making similar infrastructural improvement in Imo State”.

President Buhari commended the governor for being able to record such massive achievements with the little resources available to him and within the shortest possible time, saying, “this shows that with dedication and focus, much could be achieved for the people”.

He assured of the continuous support of the federal government to Imo State and all other states of the federation.

In his address, Governor Hope Uzodimma appreciated the president for his special love for Imo State, which has made him to accept to pay a working visit to the state two times within one year.

He informed the president that in the pursuit of the set goals of his administration, he has remained steadfast, resilient and refused to be distracted by the threats of politically motivated insecurity, social media blackmail, propaganda and have continued to do those things which looked impossible, within the shortest possible time.

He expressed the gratitude of the government and people of Imo State to the president for always being there for them, for supporting them in diverse means and making it possible for the state government to serve the people better, adding that the fact that he has been to the state twice in a space of two years was a clear confirmation that he has a special love for the state and her people.

Positing that the president has repeatedly demonstrated his love for Ndigbo and Imo State in particular, Uzodimma listed; Completion of the second River Niger Bridge, upgrading of Enugu Airport to a proper international airport, reconstruction of Aba-Umuahia-Enugu-Onitsha Dual Carriage Road.

Others listed by the governor include; the president’s recent approval for the federal government takeover of Alvan Ikoku College of Education, approval for FMC, Owerri to be upgraded to Teaching Hospital, establishment of a Naval base at Oguta, his prompt intervention to restore peace and order in the state through increased security personnels, among others.

Dignitaries who accompanied the president to the visit included; the deputy Senate President, Ovie Omo-Agege, the deputy Speaker, House of Representatives, …