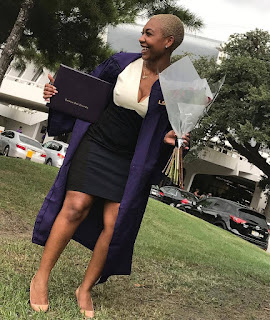 Lauren Evans have shared her story about her she was considered a failure and was unaccepted in all schools after graduating high school with a GPA of 1.5 but had to make a turn around, attended local college and is now a graduate. Never give up on your dream.
Read her story…

@lauren_evans91 – I repeated the 9th grade and graduated high school in 2009 with a 1.5 GPA. I received zero college acceptance letters as I watched my peers not only get accepted to different universities but also received scholarships to attend those same schools. After taking a year off from school I finally took charge of my life and decided to move to Greensboro, North Carolina leaving my Immediate family behind to pursue my education at a local community college. I received high marks in all my courses and I also began my first adult relationship.

At 21 years old my boyfriend was shot and killed in his home a month after his 25th birthday. Although no harm was done to my body I was internally dead. As time went on I was able to regain my strength and continued applying to different universities. Ironically I was accepted to EVERY school I applied to and received one partial scholarship. Fast forward to 2017 I received my bachelors degree from Louisiana State University at the age of 26.

I’m sharing my story just to show that failure and pain is apart of the process. Unfortunately there is no way to dress failure up ; failure is painful and can be emotionally draining but failure is not final and delay is not denial. This isn’t a success story and although this chapter of my life is closed my story is still left unwritten… Sincerely, The Under Dog #DontGiveUp!#TestimonyTuesday #RestInPeaceJeremy