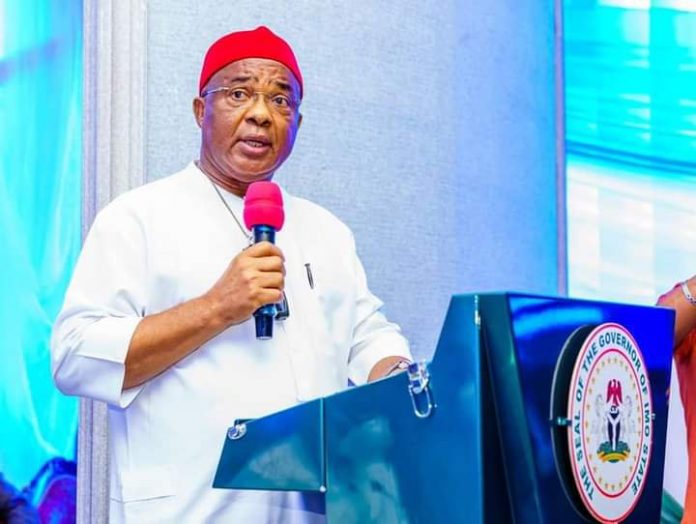 The Governor of Imo State, Sen. Hope Uzodimma has reiterated the calls for more devolution of powers to federating units even as he maintains that what the south-east seeks is equity and justice and not secession.

The Governor made the remark when he welcomed the House Committee on constitution amendment led by the deputy speaker, Ahmed Idris Wase to the state on the event of the public hearing on the 1999 constitution review.

Speaking further Governor Uzodimma said that the move to amend the 1999 constitution will put to rest “our fears and agitations and accommodate our legitimate desires without compromising our rights as citizens’.

On the unity of Nigeria, Gov. Hope Uzodimma maintained that the South East zone still stands for the unity of Nigeria and by no means support secession instead an equitable Nigeria where our people especially the youths will not be treated as “second class” citizens.

The Governor reinstated that in a democratic dispensation dialogue and debate are essential in resolving conflicts rather than violence or insurrection and sees the public hearing in the state as timely and auspicious for the people of the state and South East entirely.

He added that the people want an all encompassing constitution that will work for us, accommodate us as equal citizens, that guarantees for us justice, equity and fair play, a Constitution that makes us proud to be Nigerians.

According to Governor Uzodimma “our people want a Constitution that devolves more power to the federating units, that gives vent to restructuring, that allows for greater autonomy without losing the essence of the federation. In whatever name that it is called, we need a Constitution that will make us stay together as one country comfortably.”

Gov. Hope Uzodimma while calling on the Constitution Review Committee to ensure that the constitution captures the rights of the people as well as sense of justice, equity and fairness and appealed for a sixth state for the zone. This will go a long way to assuage their present worries.

He however maintained that issues surrounding state policing, restructuring and other issues agitating the minds of Nigerians are the duty of the legislature and not the executive as such Nigerians should use the opportunity of the amendment to make a case for their needs.