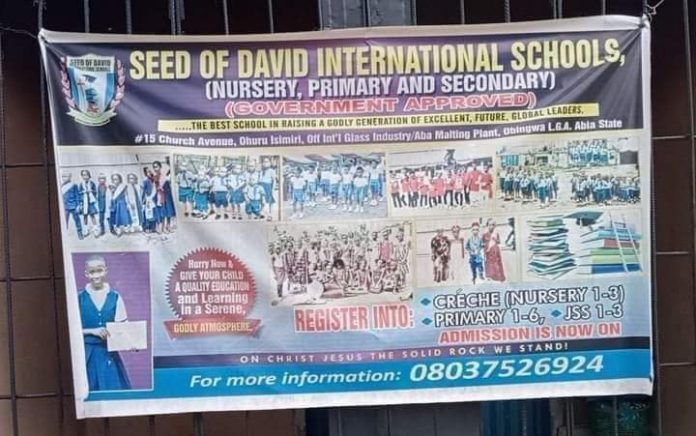 It was an emotionally laden interview with the father of little miss Success, the 10 year old pupil of Seed Of David International School Aba who was allegedly raped by his teacher whose name was given as Mr. Nathaniel.

In an interview with the News-Gazette Online, the father of the little miss Success said that his child who recently turned 10 is in basic 5 and exceptionally brilliant, she takes the first position in her class until all of a sudden she became scared of going to school and sometimes when dressed for school she will start crying and asking if its a must to go to school every day, he told our reporter that he never suspected that anything was wrong until last week after dressing the child up for school the mother came to inform him that the little girl complained that her teacher was sexually abusing her and threatened to kill her if she dares inform anybody.

He immediately took her to the hospital where some tests were conducted and the doctor after examining her said that there was redness in her private part, that it had been damaged, and that the violation was not just once it has been going on for a while.

He said, he returned to the school and met with the teacher Mr. Nathaniel who pleaded and took them to his uncle who promised to offset the medical bills as the proprietor of the school was said to be out of town.

Upon the return of the proprietor Mr. Chibunna Isreal Okoye, he went to complain to the man over the sexual abuse of his 10 year old daughter by her class teacher, rather than show empathy or try to ask the little girl what happened the proprietor stood up in defense of his teacher Mr. Nathaniel insisting that he won’t do such thing, we now asked the child to show us where the teacher used to abuse her, she took us to her class behind a wardrobe and also pointed at the teachers’ chair but he, Mr. Okoye insisted that my daughter was lying against the teacher and told Nathaniel and his uncle not to pay the medical bills as it will amount to acceptance of guilt, he also went ahead to threaten me and my family that he will deal ruthlessly with us if we drag the name of his school into a scandal.

It was at this point that a rights organization headed by Mrs. Jane Ogbauta on hearing the incident moved in and reported the matter to the police area command, the police immediately conducted another test on my daughter in their clinic to confirm the abuse and subsequently arrested the alleged pedophile Mr. Nathaniel, who is currently in police detention.

He also alleged that he is still receiving threats from the proprietor of the school, Mr. Chibunna Isreal Okoye, asking him to withdraw the matter or he will deal with him and his family if the image of his school goes down, he informed The News Gazette Online that the wife of the governor Mrs. Nkechi Ikpeazu through her foundation had sent a delegation to his family and has taken up the matter.