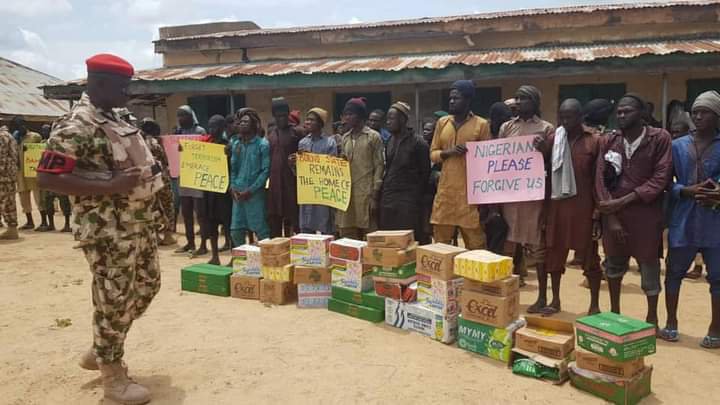 Oluwaseun, the widow of slain Ibrahim Sakaba, a lieutenant-colonel, has slammed the Nigerian Army for commending the 1,081 Boko Haram terrorists who purportedly surrendered in Bama, Borno State, on Monday.

In a statement on Monday, the army disclosed that a so-called bomb expert for the terrorist group known as Musa Adamu, a.k.a Mala Musa Abuja, and his second in command Usman Adamu, a.k.a Abu Darda, along with their families and followers surrendered to the troops of operation Hadin Kai in Bama Local Government Area of Borno.

Photos shared on the army’s social media page saw the surrendered terrorists display several placards with different inscriptions such as “Nigerians, please forgive us”, “surrender and live”, “surrender and be free”, among others.

The acting General Officer Commanding (GOC) 7 Division and Commander Sector 1 OPHK Brigadier General Abdulwahab Eyitayo had also said “their decision to drop their arms and come out is highly commendable, enjoining them to advise other terrorists to surrender and “embrace the new life of peace and rehabilitation.”

The surrendered terrorists and their families totalling 335 fighters, 746 adult women, and children were subsequently given new clothes “and assorted food items, groceries and toiletries.”

However, reacting in a post on her Instagram page, the widow of Mr Sakaba lambasted the army, just as she queried it on why the terrorists should be forgiven.

She also accused the army of pretense and not paying the dues of her late husband.

Mr Sakaba died alongside 117 other soldiers in November 2018, after Boko Haram insurgents attacked a Nigerian Army battalion in Borno State.

After his death, he was hailed by colleagues for his leadership at the Nigerian Army 157 Task Force Battalion in Metele.