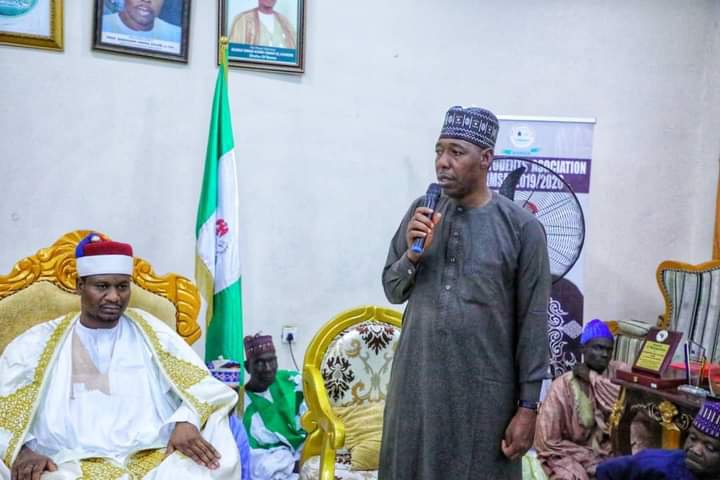 The Governor of Bornu State, Prof Babagana Zulum has stated that the country has to choose between an endless war or accepting surrendered repentant terrorists back into the society.

Speaking on Saturday in Bama and Gwoza to military officers and community leaders, he said that the ongoing surrender of Boko Haram fighters has left Borno State with two extremely difficult situations. He said the situation requires diverse stakeholders including representatives of attacked communities, to come together and critically review the pros, cons and implications of the surrender, to agree on a well-thought-out framework.

“We (in Borno) are in a very difficult situation over the ongoing surrender by insurgents. We have to critically look between two extreme conditions and decide our future. We have to choose between an endless war or to cautiously accept the surrendered terrorists which is really painful and difficult for anyone that has lost loved ones, difficult for all of us and even for the military whose colleagues have died and for volunteers. No one would find it easy to accept killers of his or her parents, children and other loved ones. In the last 12 years we have been in this war, and we have lost thousands of fellow citizens. We don’t know the whereabout of thousands of others, we don’t know whether they are alive or dead. In these 12 years, millions have been made homeless and many wealthy farmers, transporters and others have been rendered poor. In these years, we were able to cultivate maybe around 3% of the arable land, and as a result our people became dependent on food aid amid donor fatigue and potential food insecurity, infact the repercussions of the Boko Haram crisis are enormous and as someone who has been involved with assessment of the impacts and rebuilding efforts in the last seven years, I am in position to know the endless negative impact the Boko Haram has made in Borno” Zulum said.

The Governor said accepting Boko Haram has the risk of seriously offending the feelings of victims with potential of civil rebellion, just as there is the risk that if Boko Haram fighters willing to surrender are rejected, they can join ISWAP to swell the ranks of fighters in the bush and the path of peace becomes narrowed.

“On my way travelling to Gwoza and Bama, I saw many people cultivating their farmlands by the roadside and this is an indication of emerging peace, which we have to sustain in order to salvage our people. However, like I said, we must come together to carefully analyze the two extremes and come up with a workable framework” Zulum said.

Zulum explained, that he will engage in high level consultations with President Muhammadu Buhari, service chiefs and resident security heads, traditional rulers, elders and religious leaders, national and state assembly members, academics and other stakeholders particularly victims of the crimes perpetrated by the insurgents, so that stakeholders will critically review the situation and come up with a framework on how to move forward.