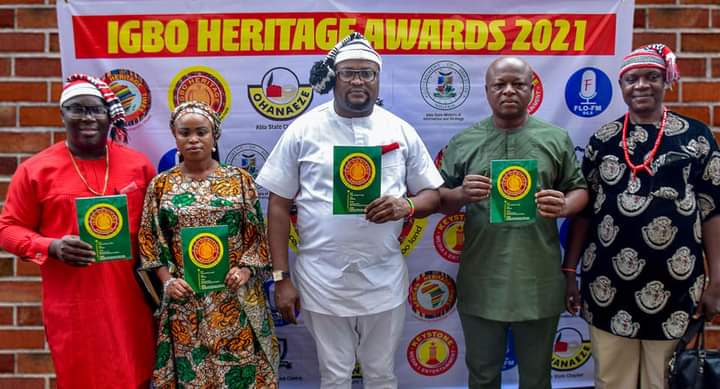 The endorsement was given at the general meeting of Ohaneze Ndigbo (Abia State Chapter) during which the organizers of Igbo Heritage Awards paid a courtesy call on the President, Mazi Okey Paul Nwankwo at the Ohaneze Ndigbo Secretariat, Umuahia.

According to Mazi Okey Paul Nwankwo, “We have taken time to look at the profile of Igbo Heritage Awards and we are convinced that it is remarkably different from many other award brands that we have been approached in the past to support. We see Igbo Heritage Awards as a consummate recognition platform across Igbo land and a bridge to Igbo unity, capable of harmonizing diverse pan-Igbo interests in a socially inclusive system. Thus, in exercise of our mandate to promote unique ideas positioned to move Igbo land forward, we are glad to endorse Igbo Heritage Awards, with the assurance of our full support for its second edition holding in Abia State in October. However, we must make it clear that our support is hinged on the condition that this Award must not be conferred on people of questionable character or people who are not staunch supporters of Igbo interests.”

Mazi Okey Paul Nwankwo, who is also the Chairman, forum of Presidents of South East and South-South State Chapters of Ohaneze Ndigbo, promised to help secure the support of other State Chapters as well as the National Secretariat led by Professor George Obiozor.

Speaking earlier, leader of the delegation and Editor-in-Chief of African Heritage Times, Mr. Victor Nwokocha, explained that Igbo Heritage Awards was instituted in 2019 to honour outstanding Igbo patriots across spheres and generations, whose pioneering breakthroughs, leadership excellence and humanism enriches the Igbo heritage of excellence, making Igbo land, Nigeria and Africa proud. He said that the first edition held in Enugu and the second edition, jointly organized by African Heritage Times, Flo FM 94.9 Umuahia and the Igbo Renaissance Centre of Gregory University Uturu, is billed to hold in Umuahia on October 8, 2021.

Mr. Nwokocha said that the Awards, now the biggest advocacy initiative for heritage preservation and promotion across Igbo land, was founded as a sovereign and non-political recognition platform celebrating the distinctive courage, resilience, freedom, culture, greatness and collective self-empowerment of the Igbo man. He appealed for the support of Ohaneze Ndigbo Abia State Chapter and those of other States and the National Headquarters in Enugu.

Also speaking, the Principal Assistant Registrar, Igbo Renaissance Centre, Gregory University Uturu, Reverend Canon Samuel Ekechukwu, said that the Centre has been part of Igbo Heritage Awards from the beginning due to the objectives of the Awards and the commitment of the Centre to promoting sustainable pan-Igbo initiatives. Reverend Ekechukwu, who briefly outlined the activities of the Igbo Renaissance Centre, conveyed the goodwill of the Chancellor of Gregory University, Professor Gregory Ibe to Ohaneze Ndigbo and extended the Chancellor’s invitation to everyone to visit the Centre either for research or recreational purposes.

Delivering his vote of thanks on behalf of the delegation, Mazi Prosper Nwachukwu of Flo FM Umuahia, thanked the President and members of Ohaneze Ndigbo Abia State Chapter for their unanimous endorsement and assurances of support, and pledged that Igbo Heritage Awards would always advance the crusade of Ohaneze Ndigbo for the emancipation of Igbo land, in line its objectives and the theme of the forthcoming edition – Heritage and Renaissance in Igbo land: Imperatives for Socio-Economic Revolution. He also expressed profound appreciation of the organizers to the Chancellor of Gregory University and the Abia State Commissioner for Information and Strategy, Chief John Okiyi Kalu, for supporting the Igbo Heritage Awards initiative.