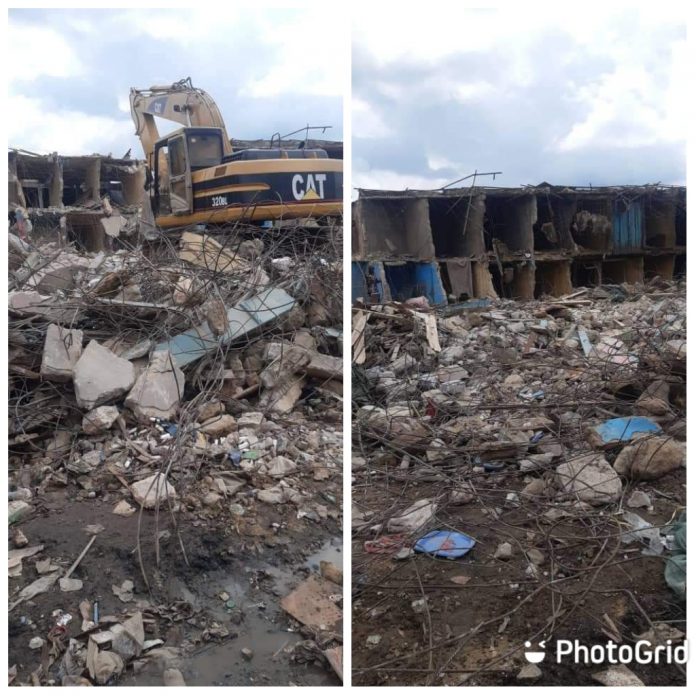 Reports reaching the Project Implementation and Monitoring Committee on the Rebuilding of the Ariaria International Market, have it that some scavengers who went on illegal demolition of a structure in the A-Line section of the market were trapped and injured as the already compromised building collapsed on them.

The developers who were not on duty at the time of the unfortunate incident had cordoned off the project site, but the scavengers defied the cordon, gained access to the site and started demolishing what was left of the buildings while searching for disused steel, wire and other materials to cart away.

While the trapped scavengers have since been rescued and are now receiving medical attention, we are glad to announce that no life was lost in the incident.

Scavengers and other youths have been obstructing excavating machines at the site while searching for disused iron and other materials while others have broken into shops and looted goods stored in them by traders. Just last week, the rubble also fell on some scavengers who sustained severe injuries as they went in search of disused materials in the active site.

Recall that the committee had warned that the daily upsurge in the number of scavengers in the area is not only delaying the efforts of the developers to meet up with the December deadline set by Governor Okezie Ikpeazu to deliver a modern market and hand over shops to all allottees, but that it also poses great danger to the scavengers and other unauthorised persons.

Once again, the committee strongly advises parents to warn their children to keep off the project site as security agents have been placed on red alert to arrest and prosecute defaulters.