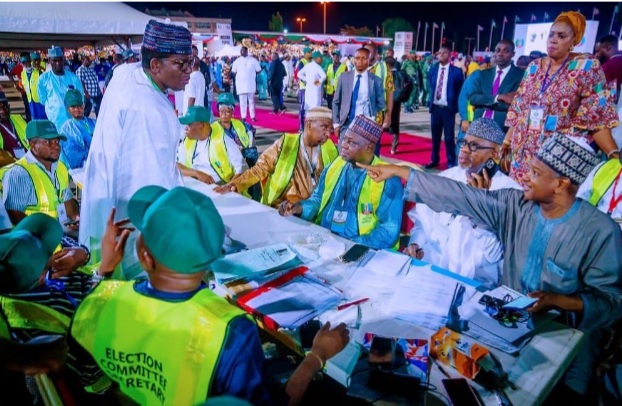 I was fed up with the unendingly immature political melodrama and indiscipline of the All Progressives Congress (APC) presidential primary and national convention on June 7, which spilled over to June 8, but here are five key takeaways from it.

The cabal was factionalized and sometimes even at odds with Buhari himself. Its members couldn’t agree on a candidate. Even Buhari himself wasn’t consistent in whom he wanted to lend support to. He endlessly vacillated between a slew of options—Rotimi Amaechi, Timipre Sylva, Ibikunle Amosun, and later Ahmed Lawan—and fixed his gaze wherever the wind blew.

The last person to talk to Buhari got his blessing, which led to a situation where scores of people thought they were his favored candidate.

I kept this information to myself because I couldn’t verify it from another source. A day later, Jaafar Jaafar, publisher of the digital-native Daily Nigerian newspaper who became famous for his videographic investigative reporting of Governor Abdullahi Ganduje stuffing dollars in his babbar riga, posted a social media update that partly aligned with what the source had told me.

“I [learned] that Mamman Daura, 82, Babagana Kingibe, 76, and Abdullahi Adamu, 75, mooted the idea of fielding Ahmad Lawan as the ‘consensus’ candidate, jettisoning [the] party’s power shift arrangement and damning the stability and unity of the country,” he wrote. “I’m concerned about APC’s decision on its presidential ticket because the party took a political loan on behalf of all Northerners. It’s time for payback. Tossing away power shift will deepen mistrust and enmity between North and South.”

Kingibe later called Jaafar to say he wasn’t in on the push to adopt Lawan as the presidency’s consensus candidate. Kingibe, of course, is notorious for being extraordinarily slippery and truthless.

In spite of all the coercive and symbolic resources at their disposal, neither the cabal nor Buhari could defeat Tinubu. And it wasn’t for lack of trying. This says more about the ineptitude of the regime’s upper echelon than about Tinubu’s matchless political machismo.

From the planning of the convention to its sudden postponement; from the botched consensus plan to the fractious infighting among APC’s National Working Committee members, governors, and the Aso Rock cabal; and from the subpar voting to the party’s inability to conduct the convention within the time frame it specified in its programme of event, we see a party and a government that are dismally incompetent, that just desire power without the littlest interest in governance.

Even after manipulating INEC to accede to its unfair rescheduling of its convention, by early Tuesday there was still uncertainty about whether the convention would hold. If they could, APC would have asked INEC for another adjournment of their convention.

That represents the best example of what ethicists call “enlightened self-interest,” that is, unselfish concern for others that ultimately benefits the ones who give it. It’s a paradoxical kind of selfishness that I call altruistic selfishness.

Had northern governors supported the APC party chairman’s endorsement of Ahmed Lawan as the consensus candidate and sidestepped a primary election, APC would have died a natural death, Bola Tinubu would have transmuted into a more dangerous Sunday Igboho, the foundations of the country would have been shaken, and there might be no country for the elite to exploit.

A couple of people close to a few northern governors confided in me that the governors were mortified by the prospect of a northerner becoming the party’s candidate because it would do irreparable harm to reputational capital of northerners as “trustworthy” people, especially considering that several of them had railed against Goodluck Jonathan for dishonoring the gentleman agreement they had had with them to complete Yar’adua’s term and hand over to a northerner in 2011.

We can also speculate from the list that Governor Kayode Fayemi’s decision to stand down as a contestant and endorse Tinubu had no effect on the outcome of the election. Only 5 delegates from Ekiti State voted for Tinubu; Osinbajo got 48.

Had he transcended the easy lures of toxic religious particularism, particularly because he is a pastor in a religiously fractured country, he might have been APC’s presidential nominee today. He was the choice of many northern Muslim governors until I exposed his RCCG bigotry and theocratic fantasies with incontrovertible empirical fidelity.

Smart politicians don’t do anything to call attention to a strength that can be a major political liability. Former U.S. president George W. Bush, for example, is the scion of “old money” who went to elite prep schools and graduated from Yale University. His father had been president 8 years earlier, and Americans hate political dynasties.

If he wanted to sound “polished” and “cultivated” during his presidential campaigns, he could, but he would risk calling attention to his privilege and thereby alienating people he wanted to appeal to.

What did he do? He spoke with a drawl, intentionally mangled his grammar, and came across as a little stupid. No one talked about his political dynastic privilege.

In several polls that asked American voters whom between Bush and Al Gore (who was from a middle-class background) they’d like to have a beer with Bush won by wide margins. Bush successfully deflected attention from his privilege and came across as an ordinary, approachable, folksy guy.

Not Osinbajo. Up until the last day of the election, his minions were still playing self-destructive religious politics. They trended Christian religious memes on social media to support him, sent text messages to delegates that said Tinubu would run with a Muslim running mate, etc.

This caused him to lose even more delegates on election day. I know this because I communicated with some delegates who told me they would switch the “sympathy votes” they had planned on giving Osinbajo to other candidates.

Tinubu and Atiku are Close Friends
Abubakar Atiku and Bola Tinubu will be opponents in next year’s presidential election, but they are very close personal and political friends who’re more alike than unlike.

Tinubu told American diplomats in Lagos in 2003, in cables exposed by WikiLeaks in 2011, that his decision to go into partisan politics was inspired by Atiku.

“Tinubu praised Vice President Atiku Abubakar, whom he has known for many years,” the Consul General wrote in cables WikiLeaks brought to light in 2011. “Elaborating on his knowledge of the VP, Tinubu said he has known and understood the VP even before his entry into politics. Atiku is a detribalized politician who knows where he is going and how to build bridges to get there.”

The Consul General also wrote that, “Tinubu credits his going into politics to Atiku’s personal encouragement.”

You wouldn’t guess that going by the way they and their agents tore at each other—or at least pretended to— in the 2019 presidential election and the way they may fight each other in the coming weeks and months.