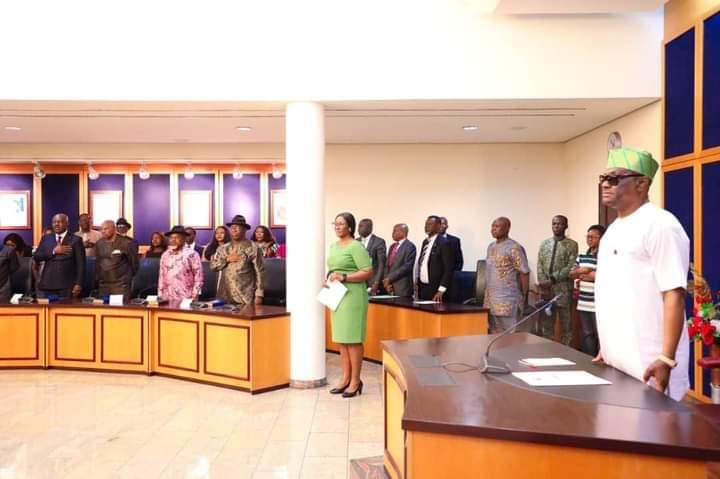 Rivers State governor, Nyesom Ezenwo Wike has tasked commissioners, heads of ministries, departments and agencies to begin compilation of relevant information required to document as successes, covering from 2015, when his administration started.

The Rivers State governor gave the charge after he had sworn-in five new commissioners on Saturday at the Executive Chamber of Government House in Port Harcourt.

Governor Wike informed that his administration was in its last lap and there was need for the different ministries to begin compiling records of their activities instead of handing over day.

“Everybody should as a matter of fact put the records of their various ministries together. You won’t wait till May 29, 2023. You have to start now since this administration started in 2015. State what we have done, and by the grace of God, when the new person (governor) comes, he will have a handover note and it will not be like me who didn’t get a handover note.

“Everything we have done, all the records. What we have bought from ministry to ministry, you have to start compiling them. I don’t want to hear a situation where you will say there is no time, there is plenty of time. You don’t need to wait till the last day. That is why things are difficult for some people.”

Governor Wike told the newly sworn-in commissioners that his administration was in its finishing stage and so much was required of them to ensure a good ending.

He urged them to serve the State with incontestable passion, demonstrate competence and leave an indelible imprint in their various ministries of posting.

The governor acknowledged that some of them had served the state in a different capacity as former commissioners and special advisers. He, however, urged them to utilise this present opportunity to further contribute to the development of the State.

“It is not how long that you stayed in office that can make the difference. It is the passion and commitment that you give to it. You can be in office for six months and people will see your impact, and your impact will be known. But if you cannot do it within that period, even if they allowed you to stay ten years, you may not also be able to carry it out.”

The Rivers State governor described as an aberration the appointment of someone without requisite intellectual acumen to represent the State as a minister in the Federal Executive Council.

“I have never seen an embarrassment like that in my life. Yes, you must appoint those who are loyal, but educated people are also loyal. It has never happened in our State. Everything cannot be politics. The image of the State is key.”

Governor Wike also informed that his administration has completed more projects that are scheduled for the inauguration. He, therefore, stated that such project inauguration on ceremony will commence in early August 2022 and will last for two weeks.