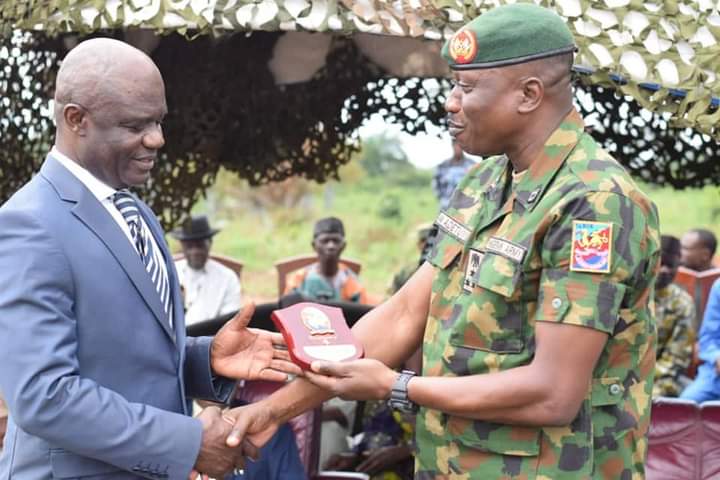 The Abia State Governor, Dr Okezie Ikpeazu has expressed confidence that the Nigerian Army and other Security Agencies are capable of dealing with criminal elements disrupting the deserved peace and tranquillity required for economic development during the Golden Dawn 11 exercise, the Yuletide seasons and electioneering period.

Speaking at the 14 Brigade Step Up Headquarters, Amaekpu Ohafia in Ohafia L.G.A, during the official flag off of “The Exercise Golden Dawn 11”, Dr. Ikpeazu represented by his Deputy, Sir Ude Oko Chukwu also charged the army to observe laid down rules of engagement and code of conduct to avoid actions that may infringe on the rights of citizens and host communities.

The governor expressed confidence that the exercise aimed at fostering the much needed civil -military cooperation between the Military and Abians will also assist greatly in flushing out criminal elements within the nooks and crannies of the State.

He used the forum to urge them to attach great importance to compliment State Government’s efforts in providing succor to various communities, while imploring Abians to cooperate with the troops and other Security Personnel in the conduct of the exercise.

Gov. Ikpeazu further assured them of Government’s continued support to enable them carry out their constitutional responsibilities.

In his address, the Commander, 14 Brigade, Nigerian Army, Ohafia, Brig. Gen Adegoke Adetuji said the exercise is designed to promote conducive environment for businesses and other socio-economic activities as well as enhanced the security of law abiding citizens of the State during the Yuletide seasons and electioneering period.

Brig. Gen Adetuji further explained that the Army will collaborate with other Security Agencies to perform the exercise, adding that the Exercise Golden Dawn 11 which also featured a Free Medical Outreach for the host Community, Amaekpu Ohafia to promote the civil military cooperation between them and host communities and assured residents and visitors of their safety during and after the period.

Earlier in his remarks, the Traditional Ruler of Amaekpu Ohafia Community, Ezieogo Uduma Obuba Kalu while appreciating the Army Command for their security watch over the Community advised Amaekpu residents and visitors to always cooperate with officers of the Military Command in their security patrol and quest to maintain peace and order.

The event which featured Special presentation to the Governor, Dr Okezie Ikpeazu, and official flag off ceremony as well as inspection of the Medical Outreach organized by the Nigerian Army for the Amaekpu Ohafia Community attracted the presence of the Commissioner for Establishment and Training, Chief Chidiebere Uwagwu Kalu, the Chairman Ohafia Council of Traditional Rulers, Eze Igwe Ojike and Heads of Sister Security Agencies.