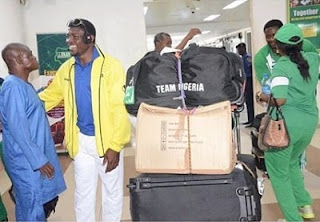 Three Nigerians disappeared at the Commonwealth games in Australia. They include the head coach with two athletes who were suppose to compete in the ongoing competition.

The head coach of the Nigeria Weightlifting Federation, a coach in the special sports, and a 200m runner, all disappeared at the competition venue. .

The President of Nigeria Weightlifting Federation, Mohammed Yahaya has described the disappearance as a “big embarrassment”. A furious Yahaya told Guardian in a telephone chat that he didn’t expect the head coach of a national team to “escape” at a competition venue.
He said: “This is very embarrassing to us because as a head coach, I expected him to act like father to the athletes. But our head coach disappeared into the thin air even before the Games were concluded.”