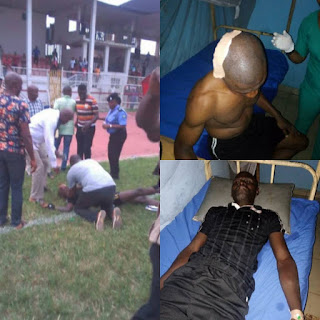 The referee who officiated a match between Heartland of Owerri and defending Champions, Plateau United, was attacked by Heartland football fans after the match ended in a 1-1 draw as Tosin Omoyele of Plateau United scored the equalizer.
This angered Heartland fans and they attacked the referee, blaming his officiating as the reason the Heartlands didn’t win.

He was beaten to a coma and was admitted in a hospital in Owerri.