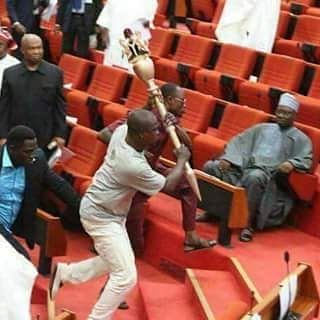 Comedian Alibaba weighs in on the stolen mace citing that we are our own problem. He posted this on his Instagram page sharing how it would have been easy to identify the culprits but we are in Nigeria, even if they are caught, nothing will be done to them.
Read what he wrote…

alibabagcfr With CCTV… the pictures of these guys should be on all available media spaces in this country by now. Their biodata should have been matched. The get away vehicle should have been tracked. Their criminal record fetched from a system. Thumb prints on the mace collected and documented. The footage of their arrival and departure from the National Assembly should by now be trending and their names on every strategic security meeting and public discussions. BUT NO. ABSOLUTELY NOT.

Isnt this what happened with not knowing who left bags of money at an airport and no CCTV caught him? And nothing was heard of the person behind the imported container load of arms intercepted by customs? Or the cargo plane that was abandoned at the MMInternational airport in Lagos? Isn’t this like what Orubebe did.. trying to stall the proceedings of a national election backed by the constitution?’

There is not CCTV anywhere to actually capture all these things done which can give the police a clue on where to start but no, our President is busy saying on National TV about how the youths are very lazy, that just shows how clueless he is and needs to be retired.
”Did anything happen to him? Exactly!!! As long as people get away with these horrible things that crap on our democracy and constitution, the description of Trump, sticks. We let this happen. We bring this on ourselves. We encourage corruption. We give wings to thugs. We promote armed banditry. We permit electoral fraud. We aid corrupt people into office. We empower criminals. We celebrate thieves. We ignore the things that can make our country good. We dont create jobs and cry there is unemployment. We are our own problems.”

Where is the light to even operate the CCTV or view it, the Minister of Power is hallucinating about power in his dream not in Nigeria. God help us.