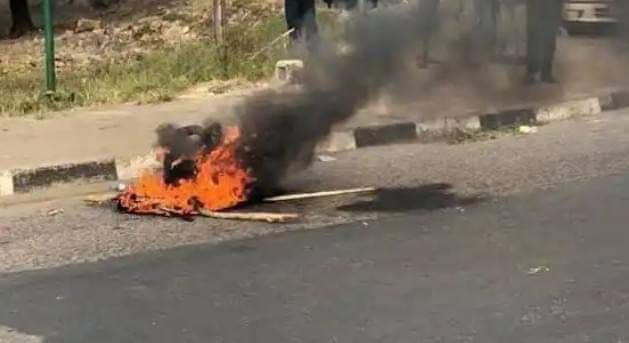 A middle aged man has been set ablaze by an angry mob on Monday morning at Makurdi in Benue State after snatching a motorcycle from a commercial okada operator in the metropolis.

It was gathered thag the angry youths chased the criminal and eventually caught him around LGEA primary school Wurukum popularly known as Suswam Thank u primary school, and set him ablaze after hitting him with clubs, stones and other dangerous objects.

The incident, which occurred around 6.20 am caused a stir, as many onlookers struggled to see the body of the alleged armed robber burning with flames on the ground.

There was traffic snarl along Wurukum Round about, as motorists were held up in a long queue.

There was no presence of policemen, and other security agencies at the scene of the incident, while the angry mob administered jungle justice on the suspected armed robber.

An eyewitness said the robber has been terrorising the area for quite some years now.

The police spokesperson assured that investigation has commenced on the incident while the okada that was snatched has been moved to the B division police station, Makurdi.