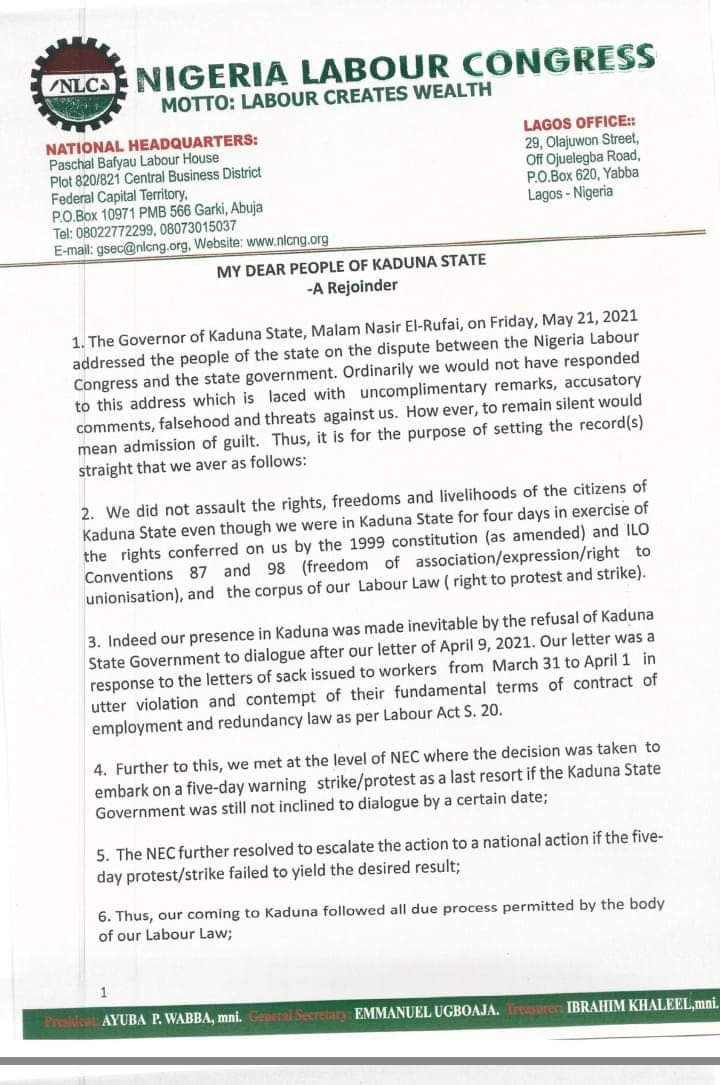 The Nigeria Labour Congress has stated that its presence in Kaduna State was inevitable following the refusal of the State Government to dialogue with the organization.

In a statement issued by the organisation through its Head of Information and Public Affairs, Comrade Benson Upah, it said that it has become necessary to respond to the allegation meted out by the Kaduna State Governor, Mallam Nasir El-Rufai that it closed down business activities in the State, revealing that the people know who sacked citizens en masse.

Speaking further, the statement also revealed how the protesters were attacked by hoodlums hired by the State Government which landed some of the protesters at the hospital.

The letter also revealed how thugs were sent to the NLC secretariat to seize the place but were exposed by unsuspecting old women who didn’t know the purpose for which they were mobilised.

NLC made it clear that government have the right to downsize its workforce but it cannot be at the detriment of the legal and humanitarian rights of workers.

Read the full text of the broadcast by the Governor;

My dear People of Kaduna State,

1. I address you today on behalf of the Kaduna State Government to thank you for your resilience in the face of the sustained assault on your rights, freedoms, and livelihoods by the NLC over the previous four days.

2. We appreciate the calm response by our citizens to the NLC’s unwarranted provocation, lawlessness, and denial of essential services.

3. We thank our traditional, community and religious leaders who helped to manage the strong feelings of our people against the needless pain imposed on them.

4. The Kaduna State Government wishes to express its regrets that such lawlessness was permitted by those with the duty to prevent it. We sympathise with all our citizens for the denial of electricity four days and the persistent attempt to disrupt normal life and prevent government offices, hospitals, banks, and other private businesses from functioning.

5. The laws of our country do not allow anyone to shutdown essential services. According to these same laws, the right to strike does not include license to violate public and private facilities or to shut them down in any way. Persons on strike can withdraw from the facilities where they are working, but they are not allowed to stop those facilities from functioning.

6. As your government, we will pursue accountability for the crimes that have been committed and seek remedies for our people.

7. This Kaduna State Government has done a lot for the welfare of workers, and it has tried to do this while vigorously trying to develop the state and advance the interests of the majority of our people.

8. Kaduna State is the first government, whether federal or state, to start implementing the new minimum wage. From September 2019, we began paying the new wages with consequential adjustments that raised take home pay by up to 66%. Our 23 local government councils also complied.

9. We increased minimum pension to N30,000 monthly for retirees on defined benefits. We started a Contributory Pension Scheme in January 2017 for which the National Pension Commission ranks us as among the best performers in funding it. We have paid over N13bn out of the arrears of gratuity and death benefits that we inherited from previous governments that remained unpaid from 2010.

10. Civil servants bought over 80% of the non-essential residential houses sold by this government since 2017. We arranged mortgages with single-digit interest rate to enable them to afford and pay for these houses.

11. Many states are yet to pay these wages, while some that began paying have reversed it. But it is the state that is consistently paying that the NLC came to sabotage. We will not become a state that only pays salary, and no amount of pressure will change that. We are a state that believes in progress and development, and we will continue to prioritize this. We cannot continue to use 84% to 96% of our revenues to pay salaries of less than 1% of the population. The rest of our people, all 99% of them, need better schools, hospitals, water supply, roads, markets and support for agriculture to make a living outside government.

12. We will uphold our oath of office to promote the welfare and progress of 10m citizens and we will not spend all or most government resources on the less than 100,000 persons that are public servants. Everyone can see how our urban renewal programme is changing Kaduna, Zaria and Kafanchan for the better. Even our adversaries admit that our social services have improved, and jobs are being created by the private sector due to a conducive economic environment.

13. Therefore, we will rightsize the public service in the interest of the state. In shrinking the public service, we will reduce the number of political appointees and civil servants. We are verifying personnel records to remove staff without the required qualifications or with fake qualifications. While we exit unqualified and poorly skilled people, we continue to recruit more teachers, health workers and other professionals for our agencies.

14. In 2017, we offered land for farming to the unqualified teachers that were disengaged. Not many took up the offer, but it is still available, along with access to concessionary funding for SMEs.

15. We are in difficult times. Let no one pretend that we can manage the situation by not taking the required measures. We are honest enough to confront our challenges and not behave like the ostrich.

16. Let us all stand together against the entitled unionists who invaded our state to inflict pain and misery on our people. I assure you that the Kaduna State Government will always put the people first.

Thank you for listening.