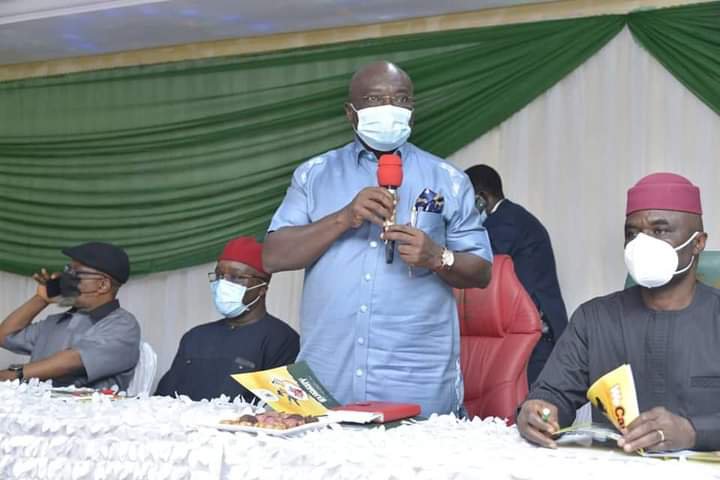 Abia State Governor, Dr Okezie Ikpeazu has declared open a 2-Day Security Summit in Abia State with a firm commitment towards implementing workable and responsive recommendations for improved security in the state.

Governor Ikpeazu who was speaking while declaring the summit open in Umuahia, the Abia State capital, noted that his administration was fine-tuning the existing Abia State Vigilante Law to complement efforts of the Abia State Homeland Security outfit in readiness of being deployed for strategic security operations based on the recommendations of the summit.

The Governor said, “my thoughts for Ebubeagu is that it should be the intelligence gathering arm of the security architecture of the South East supported by the Hunters Association and every other group who depend on the bushes and forests for their living on a daily basis.

“The ongoing exercise of flushing out criminals from our forests will be steady until the state gets rid of criminal elements from across our bushes and forests in Abia”.

The State Chief Executive said that remarkable success has been made in the efforts towards deploying ICT in the fight against crime through the Abia CPAMS Initiative conceptualized to take records of criminals through the use of Apps on internet-enabled phones.

“This government has tried to deploy science and technology in the fight against crime. It is my intention to ultimately rest it on the shoulders of the various LGA Chairmen who will have the responsibility of making sure that the geographical entities they superintend over are well supervised and adequate security Intel and report made available timeously”, the Governor said.

While describing Traditional Rulers as critical stakeholders in the implementation of the outcomes of the Summit, Governor Ikpeazu directed Chairmen of the 17 LGAS of the state to also take ownership of security within their various geographical coverage.

He noted that the over centralization of the security architecture of Nigeria has been counter productive.

The Governor also suggested that the office of the National Security Adviser summons trustees of the various cult groups registered with Corporate Affairs Commission (CAC) to impress on them the need to rein in their youth wings that are terrorizing secondary and tertiary institutions in the country or face sanctions.

He commended law enforcement officers in the state for their gallantry, but expressed concern over the unchecked movement of armed herdsmen into farms and communities leading to recurring herders-farmers clashes.

He also noted that the latest robbery incident leading to the loss of the life of a security personnel along Mission Hill in Umuahia was a product of the activities of criminal elements who took advantage of the ungoverned space created by the activities of “unknown gun men” who are working on destroying existing institutions of civil order.

In his remarks, a former Chief of Army Staff, General Azubuike Ihejirika (rtd) assured the Governor of his preparedness and that of his colleagues towards coming up with implementable resolutions that will help address the prevailing security situations in the state.

General Ihejirika while assuring that Abia State has a formidable security council comprising of all security agencies in the state comprising of highly qualified and competent senior law enforcement officials, noted that Abia is sure of improving its security architecture through the roundtable discussions christened Abia security summit.

Others who attended the summit’s opening ceremony include the Deputy Governor, Rt Hon Ude Oko Chukwu, members of the state executive council, heads of security services in Abia State, current and retired security agents of Abia origin from the rank of Assistant Commisioner of Police and its equivalent in other armed services, traditional rulers and executuve chairmen of LGAs.

The summit is expected to last for 36 hours.