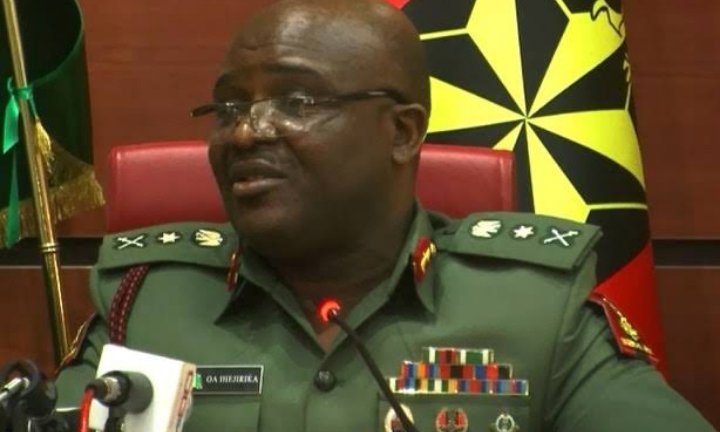 At the end of Abia State Security Summit, a communique was issued and read by the Chairman, former Chief of Army Staff, General Azubuike Ihejirika (RTD).

The resolution reads below;

The summit commended Abia State Governor for the thoughtfulness of convoking a special security roundtable summit to tackle the insecurity bedevilling the State and also inviting the senior security officers of Abia origin to avail the State of experience and expertise.

Commended law enforcement officers serving in Abia State for their professionalism and dedication to their duties even in obvious attacks and urged them to be steadfast in their primary responsibility of securing the State and its citizens.

Condemned the attacks on security formations in the State and commiserated with the Nigerian Police and other security agencies and the Independent National Electoral Commission, INEC, who have lost personnel and assets and reiterated that such dastardly acts are not healthy for the State and region.

Noted the existence of anti-open grazing laws of Abia State and recommends their enforcement.

A new security architecture by the Abia State Government that will incorporate community-based vigilante services, homeland security, CPAMS that will work in conjunction with the statutory security agencies to enhance the security and safety of the State.

Called on the citizenry to continue to work with security agencies in Abia State in the area of provision information noting that the perpetrators of these nefarious acts are among the people and with the robust information management system, it will be easy to apprehend them.

Urged security agencies to effectively manage all information given to them by informants to avoid backlash against the informants and called for an institution of an effective incentive system to encourage more people to come forward on the activities of criminal elements in the State.

Urged traditional rulers in Abia State to continue to play active roles in securing their domain noting that they were very important in the security equation because of their proximity to the people and knowledge of people residing in their domain.

Called for more stringent crackdown of illicit drug usage in the State as a correlation exists between drug use and criminal activities. The National Drug Law enforcement agencies should intensify efforts to reach the stage of illicit drug dealers and users.

Called on the Abia State Government to continue to create the enabling environment for human security by providing more jobs and other economic opportunities for teeming youths of Abia State so that they will gainfully be employed and less inclined to criminality.

Urged the involvement of the State legislatures in the fight against crimes and criminality in Abia State by getting them to assiduously pass laws that will ensure the security of State.

Urged heads of tertiary Institution in Abia State to continue to involve robust solution to curb the issue of cultism and other tertiary institution based criminal activities.

Urged greater inter-agency collaboration amongst security agencies in Abia State and called for a creation of a robust central information-sharing system that will enable other security agencies to be abreast of efforts by other agencies.