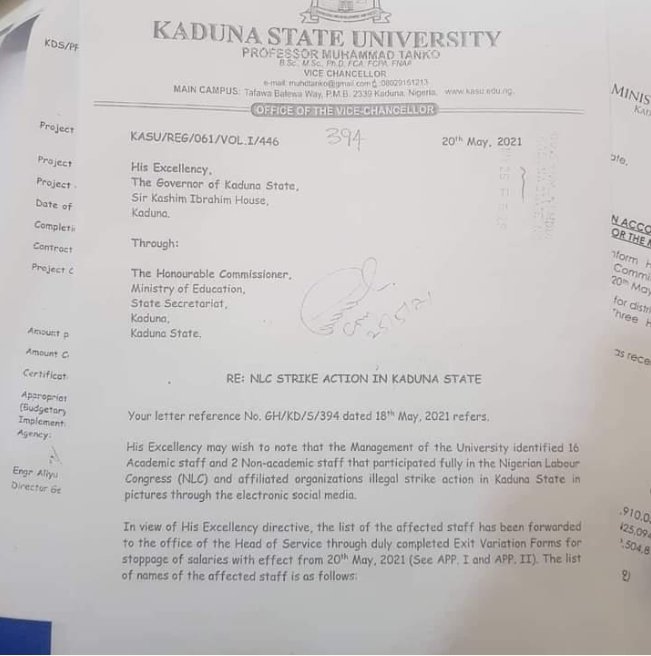 NLC led by it’s Chairman Ayuba Wabba staged a protest in Kaduna State last month over the lay off of many staff of State Government without the due process.

In it’s five-day protest which was cut down to three days by the intervention of the Federal Government, the NLC shut down activities in the State which irked the State Governor, Mallam Nasir El-Rufai who ordered a man hunt for the NLC Chairman.

His Excellency may wish to note that the Management of the University identified 16 Academic staff and 2 Non-academic staff that participated fully in the Nigerian Labour Congress (NLC) and affiliated organisation illegal strike action in Kaduna State in pictures through the electronic social media. In view of HIS Excellency directive, the list of the affected staff has been forward to the office of the Head of Service through duly completed Exit Variation Forms stoppage of salaries with effect from 20. May, 2021 (Sec APP Iand 200. 12). The list of names of the affected staff is as follows:

His Excellency may wish to note that this administrative procedure was adopted based on the cumbersome provisions in the University Law and Staff Conditions of Service that states the measures for disciplinary cases.

The procedures for disciplinary actions on proven cases of gross misconduct as contained leads to outright dismissal are as follows:

Issue of query to the affected staff;

ii. The affected staff replies the query on the allegation labelled against him/her

iii, The affected staff will appear before a Disciplinary Committee;

iv. Submission of report to the Vice-Chancellor by Disciplinary Committee;

v. The Vice-Chancellor approves the recommendations of the Disciplinary Committee on behalf of the Governing Council; and

Vi. The Registrar implements the approved recommendations of the Discipline, Committee.

This is humbly submitted for His Excellency’s kind information as well as direct the Accountant-General to henceforth stop the deductions of Union Check-Off Dues of the Academic Staff Union of Universities (ASUU) of Kaduna State University (KASU) Chapter, please.
Thank you