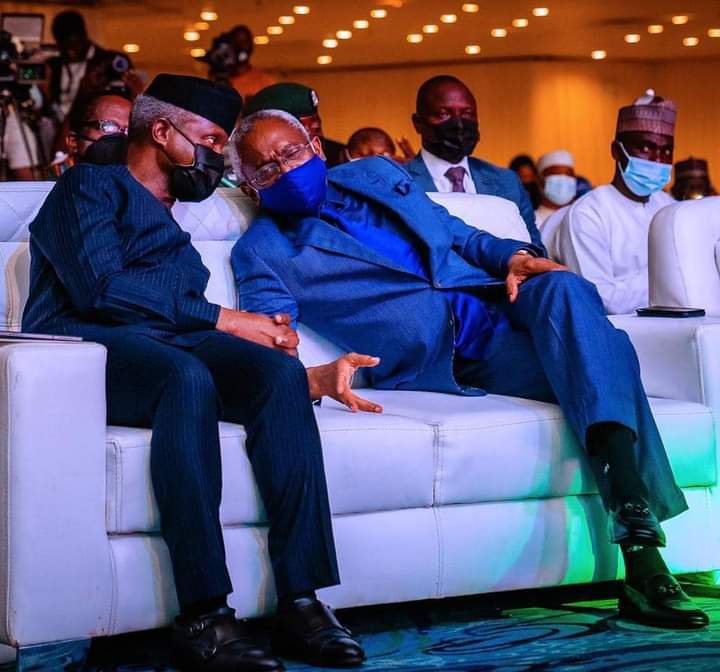 Nigeria’s Vice President, Professor Yemi Osinbajo has described the Speaker of the House of Representatives, Rep. Femi Gbajabiamila, as a bridge-builder and one of the most resilient, resourceful and successful Nigerian politicians.

Prof. Osinbajo said Gbajabiamila’s bridge-building cuts across tribes, religions, political parties and generations, noting the successes the Speaker has recorded as a politician.

The Vice President spoke at the public presentation of a photobook ‘Gbajabiamila: The Long Road,’ authored by Mr Ayo Adeagbo, the Special Assistant on Visual Communications/Personal Photographer to the Speaker, in Abuja at the weekend.

While congratulating Mr Adeagbo for the book, a collection of the photographs of the Speaker’s political journey, Prof. Osinbajo said: “Ayo has proved to be a creative and faithful storyteller of the political journey of the charismatic and photogenic Speaker.”

He said having done a personal review of the book, “I really think Ayo has done a good job. But I think the job was made easier by the fact that his subject is one of the most resilient, one of the most resourceful and most successful Nigerian politicians, having won elections five times in the last 18 years.

“He is an effective bridge builder across tribes, across religions, across political parties, and even generations. He has proved to be an innovative mediator and an honest broker in several local and national disputes and conflicts.”

Prof. Osinbajo, who said he is himself a collector of photographs, added that the book tells a lot of stories about the Speaker’s political journey.

The VP went on to share and display his collected photographs of some of Nigerian politicians such as himself and President Muhammadu Buhari; the Senate President, Distinguished Senator Ahmad Ibrahim Lawan, the Speaker; the Lagos State Governor, Babajide Sanwo-Olu; the Ogun State Governor, Dapo Abiodun; Governor Atiku Bagudu of Kebbi State and the Governor of Ekiti State, Kayode Fayemi.

Prof. Osinbajo said he was pleased “to unveil this excellent photobook” by Mr Adeagbo, whom he described as a well-celebrated and great photographer.

In a remark, the Senate President, Lawan, said the book truly presented the Speaker’s long political journey, which he said could as well be rough.

He said since his emergence as the President of the Senate and Gbajabiamila as Speaker on June 11, 2019, they have been working together assiduously and harmoniously for the good of Nigerians.

Lawan, who said he and the Speaker have come a long way, noted that: “This Speaker has been very supportive of the bicameral Legislature. Of course, the two chambers have to work together for the success of the Legislature. We work together with the Executive for good governance.

“I want to assure you, Mr Speaker, that I for one, and the entire Senate, will continue to support you and the entire leadership of the House because we have a joint task. We have only two years. It may appear to be a long time, but that is not.”

He assured that the National Assembly would soon pass critical legislation like the Petroleum Industry Bill (PIB), the Electoral Act (amendment) Bill and the constitution (amendment) Bill.

On his part, the Speaker commended Mr Adeagbo for coming up with the photobook, saying it is part of the historical stories that would survive generations.

He said: “My name and picture grace the cover of this book, but the stories it tells aren’t mine alone. Every person who appears in the pictures that make up this book, every event that is catalogued there, every smile, every frown all tell different stories.

“All of those stories are important. As a people, we haven’t always been good at keeping our records and telling our own stories, but that’s changing and it’s a good thing.

“I hope that in this generation and the next, we will learn lessons from these stories, and be inspired and motivated by them. And I hope that the stories we tell bring us closer together as friends, brethren and citizens.”

He thanked the Vice President and all the dignitaries that attended the event and called for more encouragement for young Nigerians to showcase their talents.

In a goodwill message, Lagos State Governor, Sanwo-Olu, described the book as a creative one, which tells a lot about the Speaker.

“I’m honoured to be here to say a few words. Tonight is about the young array of Nigerians that have come here to say something.

“The book isn’t so much about my brother and my friend, but about the creativity of these young Nigerians. I congratulate the Speaker for this book. We should encourage so many other young Nigerians to showcase their talents.”

Also, the Secretary to the Government of the Federation (SGF), Boss Mustapha, said the Speaker’s political journey has been a long one.

“This is a reflection of the resilience and the hard work you’ve done over the years to come to this office. I use this opportunity to wish you the very best and say that your best days are yet to come.”

The Minister of FCT, Malam Muhammad Musa Bello, in his goodwill message, said Gbajabiamila has proved to be a man of great honour and integrity over the years.

He congratulated the National Assembly for marking two years, saying the federal Legislature has provided the needed support for good governance.

There were also remarks from Senator Rochas Okorocha and the Group Managing Director of NNPC, Mele Kyari, who described the Speaker as a patriotic and true Nigerian.