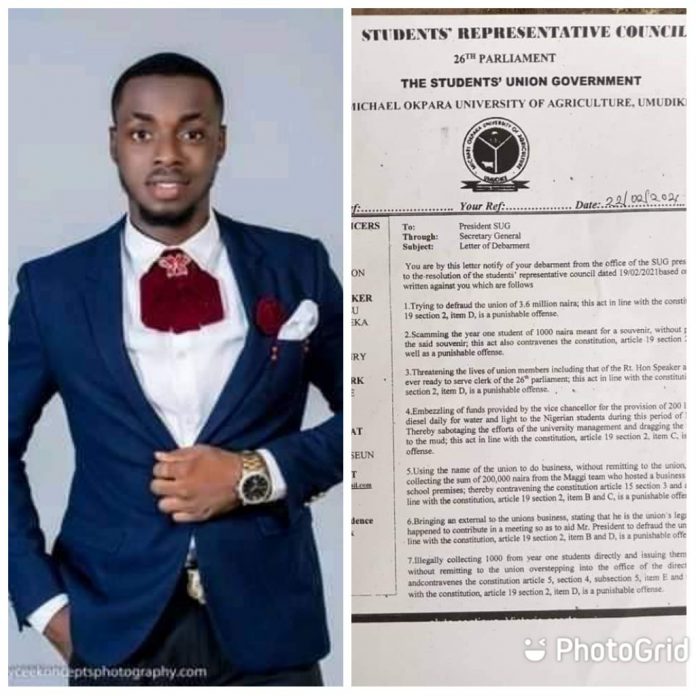 The President of the Student Union Government, Famous Otonye has been accused of defrauding students of Michael Okpara University of Agriculture, Umudike of N15,060,000.

Famous, who was elected as the President of the SUG in 2019 in a one year tenure which was extended by the COVID-19 pandemic, defrauded the students.

It was also gathered that Famous collected palliative from the Governor of Abia State, Dr Okezie Ikpeazu but never distributed it to the students in whose name the Governor gave it.

A statement issued by the Students Representative Council of the Students Union Government revealed that Famous made withdrawals from the Union account without the knowledge of the Union members and channelled the withdrawal receipt to himself.

Famous was also accused of constituting nuisance to the student’s community and constantly lying to students and trading with the name of the union without remitting any money to the union.

A 400 level student of the Physics department of the University, Gospel Emmanuel stated that Famous defrauded level one students by collecting N2100 from each.

“The surveillance fee is attached to the SUG fee of N1000 but he collected N2100 separately for the surveillance. Other levels pay N800 while incoming first-year students pay N1000 for SUG.

“Do we even blame him? He went unopposed because the late Vice-Chancellor of the school, Prof Francis Otunta screened out the person the students wanted over flimsy excuses. Throughout their four years in the University, he handpicked the Presidents which made students lose faith in the Students Union Government of the school.

“The current Vice-Chancellor, Prof. Maduebibisi. O. Iwe called a meeting last week after the protest by the students on Tuesday. In the meeting, he made it clear that there was no money to run the school as the school fees paid during the tenure of the former VC was not in the school account and asked the SUG President to remit all the money he collected.

“Of all the millions that students of MOUAU paid, none was remitted to the account of the school. The VC quickly collected his two iPhone 11, his laptop, seized his car and told him to remit all the money or he will not graduate from the school. He was impeached and his Vice President took over.

“Let me tell you, all the former SUG Presidents also defrauded the school but they were always covered by the late Prof. Otunta but nemesis caught up with this one. He never expected it.”

Read part of the statement below;

N15,060,000 amount of money embezzled from the SUG MOUAU by Famous Otonye  and cohorts