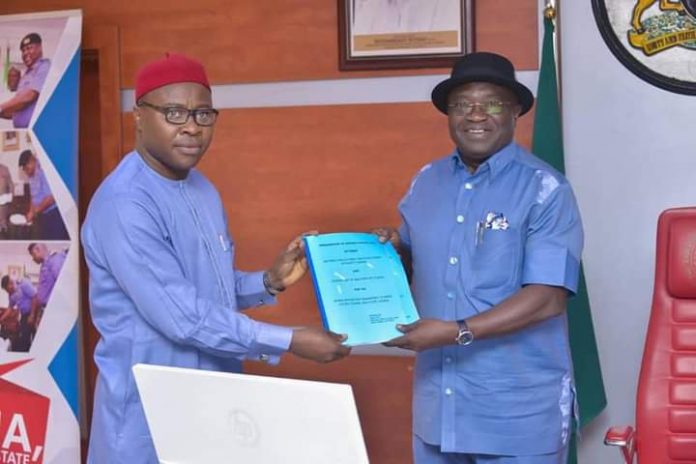 Abia State Government has signed a Memorandum of Understanding with the National Agricultural Land Development Authority (NALDA) for the reactivation of the Ogwe Golden Chicken Farms in Ukwa West LGA.

Speaking after signing the MOU with NALDA, Governor Okezie Ikpeazu expressed joy with the intervention of NALDA in agricultural development in Nigeria. He said he was particularly thrilled with the plans of NALDA to bring the Ogwe Golden Chicken back to life describing the project as not only strategic to the people of Ukwa West but Abia as a whole.

Dr. Ikpeazu who also said that he was happy with NALDA ‘s intervention in the area of fish farming in Ikwuano LGA, pointed out that federal government intervention in agriculture through NALDA has given a glimmer of hope to Nigeria youths.

Governor Ikpeazu argued that part of what has retarded progress in Nigeria is the disconnect between youths and the government, adding that NALDA through its various interventions has inspired hope in the youths. He described agriculture as a strategic entreprise and one of the greatest providers of jobs for the youths as well as raw materials for industries and appealed to NALDA to continue to mainstream the idea of engendering local participation in the economy as a way of reducing rural-urban drift and drive socioeconomic development at the grass-roots.

The Governor thanked the President for appointing Prince Ikonne to lead out in this strategic intervention and pledged his administration’s support to him and his efforts to operationalize agricultural reserves in the rural areas. He also pledged to find an appropriate centre in Abia North for NALDA’s activities and appealed to President Muhammadu Buhari to continue to support NALDA to drive socioeconomic development in the country.

Earlier in his speech, the Executive Secretary and Chief Executive Officer, National Agricultural Land Development Authority, Prince Paul Ikonne said their visit was to sign an MOU with the State government for the reactivation of Ogwe Golden Chicken project in the State. He also discribed the Ogwe Golden Chicken project as a strategic farm for the people of Abia State, adding that when operational, the farm will employ about 3000 youths while disclosing that the first phase of the project will be commissioned in December this year. He further said that the farm will comprise the processing plant, production and training sections.

According to him, the project will be community based as youths will be recruited from the immediate community and made public that Abia is entitled to three integrated farm estates to be developed by NALDA in addition to benefiting from the fish village currently being developed in Ikwuano LGA. He appealed to the Governor for the donation of more land for NALDA programs and thanked Governor Ikpeazu for his positive disposition to President Muhammadu Buhari and his administration which has manifested in attracting federal projects to the State.