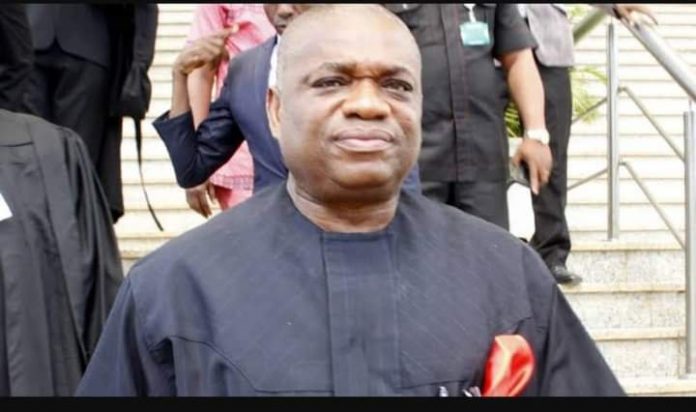 Justice Inyang Ekwo of the Federal High Court sitting in Abuja today July 2, 2021 reversed ruling for September 10, 2021 in the suit by former governor of Abia State, Senator Orji Kalu seeking to stop his retrial by the Economic and Financial Crimes Commission, EFCC.

Kalu is seeking to stop his retrial after the Supreme Court upturned his conviction along with two others on the technical grounds that the judgment was delivered after the trial judge had ceased being a judge of the Federal High Court.

Kalu contends that the attempt to re-arraign him by the EFCC on the same charge for which he had been tried, convicted and sentenced by Justice M.B. Idris amounts to double jeopardy.

Kalu was prosecuted alongside his company Slok Nigeria Limited and Ude Jones Udeogu, a former Finance Director in the state, for alleged complicity in the theft of N7.1billion from the treasury of Abia state.

The defendants were convicted. While Slok was wound up, Kalu and Udeagu bagged various jails terms.

The judgment of the lower court was upheld by the appellate court. However, the Supreme Court, ruling on the appeal by Udeagu, on May 8, 2020 set aside the judgment. It held that the judge ought not to have continued with the case having been elevated to the Court of Appeal.

The Supreme Court ordered a retrial of the case. But Kalus’s counsel, Awa Kalu, SAN argSes that the order of the Supreme Court does not apply to his client as he was not a party to the appeal before the Supreme Court. He contended that Kalu, having served a part of his term in prison, it would amount to double jeopardy to subject him to trial a second time.

But counsel to EFCC, Rotimi Jacobs, SAN, urged the court to dismiss the submission of Kalu, noting that it amounts to blowing hot and cold at the same time for Kalu to have benefitted from the same Supreme Court judgment but will not accept the burden of retrial arising from it

He submitted that the judgment, on the basis of which Kalu was jailed had become a nullity by virtue of the Supreme Court ruling, and since Kalu was quick to appropriate the benefit of the judgment to secure his release from prison, he should also be willing to accept the burden of retrial arising from the same judgment.

After listening to the submissions of counsel, Justice Ekwo adjourned proceedings till September 10, 2021 for ruling.