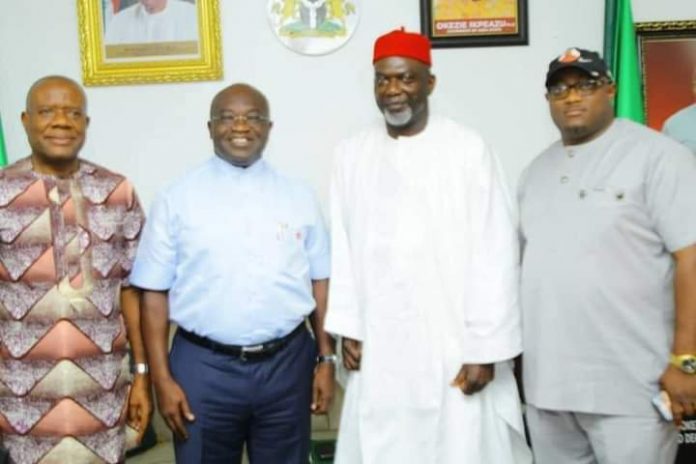 The Governor of Abia State, Dr Okezie Ikpeazu has reminded public office holders in the State that it is not only proper but mandatory to declare their assets before they begin to function in their official capacities and has therefore directed the Secretary to the State Government and relevant officers to ensure every public officer complies with the constitutional obligation for assets declaration.

The Governor was speaking while receiving in audience a delegation of the newly posted State Director, Code of Conduct Bureau (CCB), Abia State, Mr. Abel Sunday who called on him at Government Lodge, Aba. He said, henceforth, no public office holder would be sworn-in unless there is evidence that such individual has declared his assets.

The Governor who said he is committed to ensuring that an enabling environment is provided for the CCB to operate in the State congratulated the State Director on his posting to Abia and enjoined him to see Abia as his second home having served as a youth corps member in Abia State several years ago.

Earlier, the State Director of the Code of Conduct Bureau (CCB), Mr. Abel Sunday said he came to pay homage to the State Governor as the newly posted CCB boss and to seek his collaboration to fight corruption in the State and Nigeria at large.

He noted that while some public office holders in the State have declared their assets, others are yet to do so, stressing that the constitution enjoins them to declare their assets even before assuming office and afterwards.

He assured the Governor of the commitment of his office to continue to cooperate with the State Government in ensuring that public officers do the correct thing under our laws. He used the opportunity to inform public office holders that declaration of assets is a constitutional requirement which must be complied with, assuring that his office will provide every necessary support to all public officers in this direction. He also said that in the appropriate circumstances, his office will also enforce compliance with the law.

The member representing Aba North and Aba South Federal Constituency at the House of Representatives, Hon. Chimaobi Ebisike, State Chairman of the PDP, Rt. Hon Asiforo Okere were amongst other top officials of the State Government who witnessed the event.