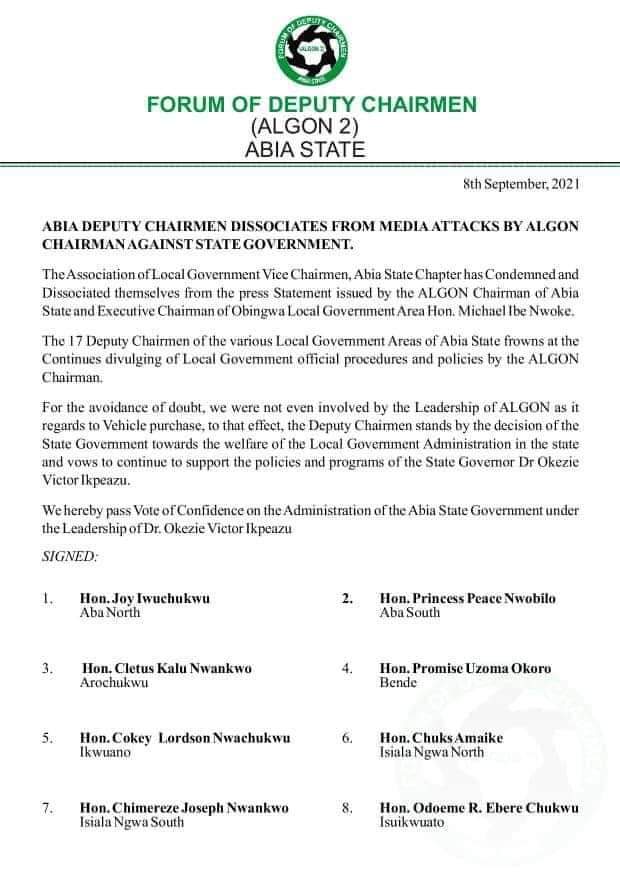 For the avoidance of doubt, we were not even involved by the Leadership of ALGON as it regards to Vehicle purchase, to that effect, the Deputy Chairmen stands by the decision of the State Government towards the welfare of the Local Government Administration in the state and vows to continue to support the policies and programs of the State Governor Dr Okezie Victor Ikpeazu.

We hereby pass Vote of Confidence on the Administration of the Abia State Government under the Leadership of Dr. Okezie Victor Ikpeazu

1.) Recall that I was invited to the Department of State Service, DSS, a week ago for questioning on a security fund earmarked for an event that I wasn’t privy to. On return from the invite, I issued a statement informing the general public the reason for the invite and warned those behind it to leave my name or office out of unscrupulous activities. These same elements have continued undeterred and have now considered threat as a new way of silencing me.

As I write, my houses both in Aba and the village are under close monitoring while i issue this statement from an undisclosed location. This however, poses a serious threat to my entire family.

These same persons ensured I was illegally removed as Abia State ALGON Chairman sometime ago without recourse to the constitution. Their plot didn’t see the light of day and they have continued in their plans. Now, they are threatening fire and brimstone because I queried why the purchase of vehicles for Local Government Chairmen and Deputies should come from them in a democratic setting like ours.

Will they also defend these actions when the chips are down?

These reasons stated above which I have over times queried have led to threats on my life and office and I wish to let the general public, security agencies and Abians know.

May I also remind them that as constitutionally elected Chairmen, the Local Government as an independent arm of government is expected to manage its resources without undue interference.