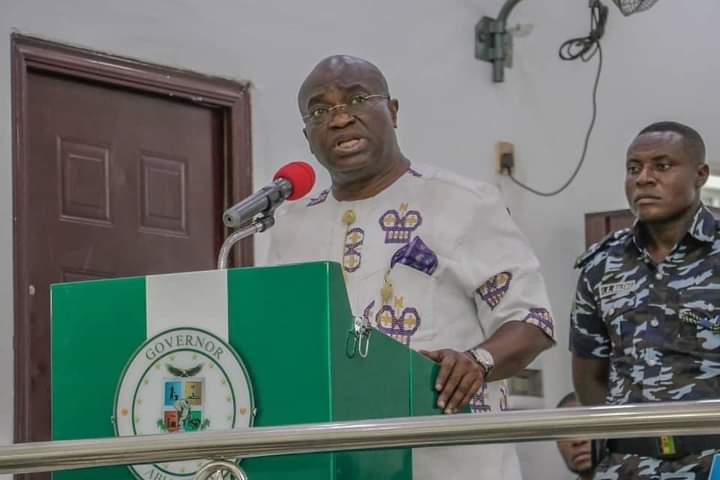 Governor of Abia State, Dr Okezie Ikpeazu has stressed the need for Nigerians to hold on to God for a solution, beyond political machinery, to the numerous challenges confronting the nation at a time like this.

The Governor made the call while speaking at the Abia Day of Fasting and Prayer programme with the theme: “Oh Lord, Heal Our Land”, held at the Michael Okpara Auditorium, Umuahia in commemoration of the 61st Independence Anniversary of Nigeria.

The Governor noted that there is cause to worry as the country has found herself in a near-hopeless situation, adding that, but for God, Nigerians would have little or no hope.

He however thanked God for the Grace upon Abia, noting that despite difficulties the state has witnessed relative peace and security and has also made appreciable progress compared to other states.

The State Governor said that it is for the above reasons and others that he organised the fasting and prayer session to seek the face of God and pray that God heal the Land.

“Anybody who is not worried in Nigeria today is either dead or spirituality blind. There is cause to worry because it is a curse if you begin to feel that your yesterday is better than your today and that your today is, perhaps, going to be better than your tomorrow. That is a hopeless situation and I think that is where we have found ourselves. We have also come here today to thank God for having led us thus far and to acknowledge His hand in our affairs, and to say that despite the fact that we are relatively peaceful here in Abia, when you see the ominous signs happening in neighbouring states, it is also a sign for you to be spiritually vigilant”, the Governor stated.

Governor Ikpeazu used the forum to call for prayers for the ten Abia youths who will soon depart the state for India to further their education under the Abia State Scholarship Programme.

In his opening remarks, the Secretary to the State Government, Mr Chris Ezem said the day was a special day dedicated for praying and fasting in Abia State to call upon the Lord to heal the land.

He recalled that Nigeria is under trial as banditry, kidnapping, insurgency among other social vices have become the order of the day, adding that the essence of the exercise was to call on God to intervene in the affairs of the state.

Ealier in his sermon entitled
“OH LORD, HEAL OUR LAND”, the President, Eastern Nigerian Conference Union of the Seventh-Day Adventist Church, Pastor (Dr) Bassey Udo said the nation lives in the days when sanctity of life is no longer respected and said that the Church needs to be more spiritually alive through prayers now than ever.

He admonished Christians not to be afraid of the times as God is ready to protect them in spite of the current challenges across the country.

The man of God stressed the need to put a stop to terrorism, hatred, hunger and continuous sit-at-home and embrace peace and sustained trust in God. He concluded by thanking Governor Okezie Ikpeazu for initiating the prayer and fasting session.

In his speech, the Chairman, Christian Association of Nigeria (CAN), Apostle Emmanuel Agomuo lauded the Governor for organizing the prayer and fasting session and requested that it be made a regular exercise.

Highlights of the event were intercessory prayers for the state and nation while the wife of the Governor, Mrs Nkechi Ikpeazu, the Deputy Governor, Sir Ude Oko Chukwu and his wife, Lady Vivian Oko Chukwu, the Chief of Staff to the Governor, Professor ACB Agbazuere, members of the state Executive Council and other Government functionaries and Abians graced the prayer session.