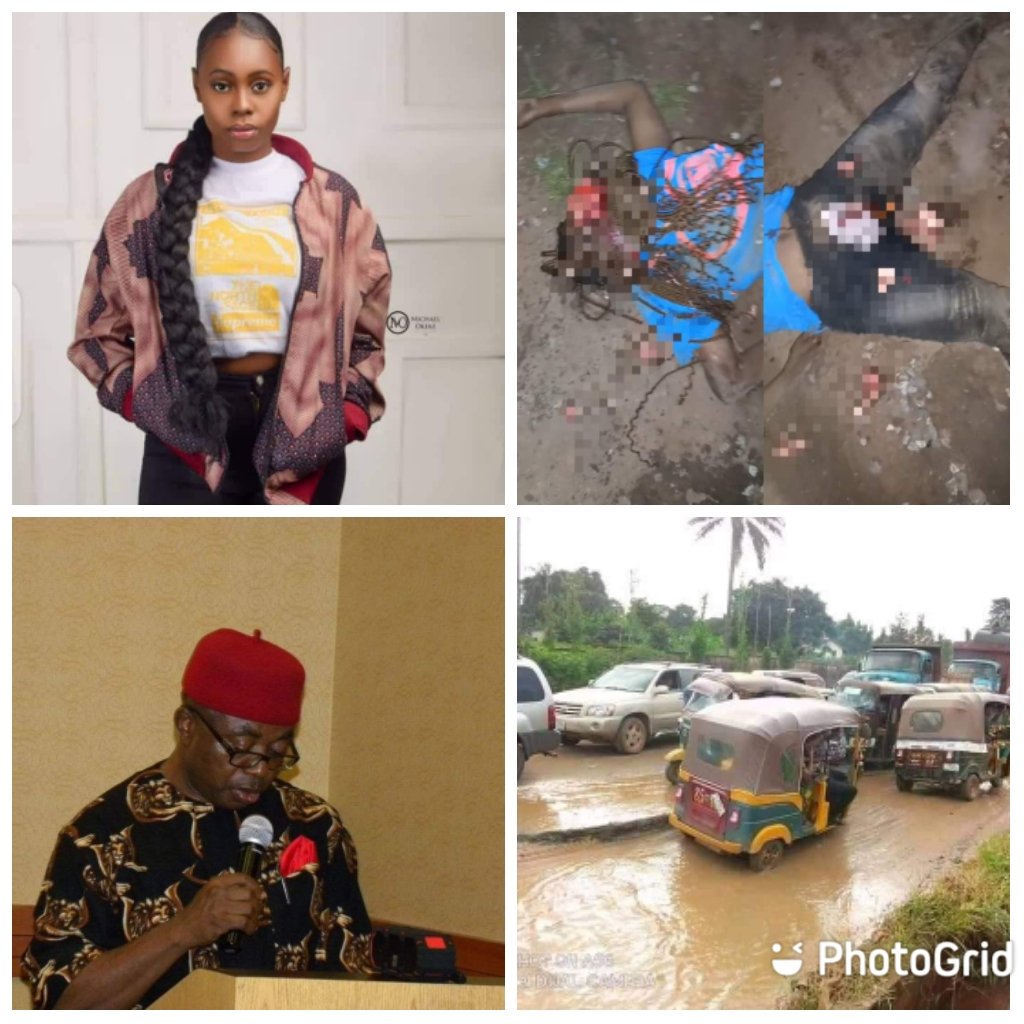 Commuters have been left stranded as students of Michael Okpara University of Agriculture, Umudike, MOUAU, Abia State have taken to the streets in protest over the bad state of the road.

On the 3rd of October 2021, as Nigerians were watching the grand finale of the Big Brother Naija Shine ya eyes show, a final year student of MOUAU, was killed by a reckless truck driver who was over speeding on the bad road.

Chidinma Ogbonna, the final year student of Fishery was nipped out of her young life by the unidentified truck driver who lost control of the truck on the deplorable condition of the Umuahia-ikwuano-ikot expene Federal road in Abia State.

In a viral video, Chidinma’s brain was seen splattered on the road with no hope of being saved.

Taking to the streets in protest on Monday morning, the students made it clear that it was a peaceful protest on the state of the road and were determined to stay on the streets until the road is fixed.

The Umuahia-Ikwuano-Ikot Ekpene road has been in a deplorable state despite the intervention of the federal government through the member representing the Umuahia-Ikwuano-Ikot Ekpene constituency, Sam Onuigbo, the Federal Road Maintenance Agency, FERMA, was directed to start reconstruction work on the road in 2016 with a rigid pavement due to the high rate of heavy truck vehicles that ply on the road.

Prior to the lockdown due to the outbreak of the COVID-19, workers were sighted working tirelessly on the road up to a short distance to Government College Secondary School, Umuahia, but since normal activities returned in the country, the workers have not been sighted on the road.

During the 2020 festive season, the Abia State Government fixed a portion of the road that was in a bad shape but since the rainy season started, the road has gone back to its original shape.

Meanwhile, limestone was seen at the site of the dilapidated portion of the road just adjacent to WellSpring Academy with a banner of the Representative of Umuahia-Ikwuano-Ikot Ekpene Federal Constituency Sam Ifeanyi Onuigbo as the initiator.

I am usually the kind of person who prefers to do my work in silence and let the results speak for themselves. On several occasions, my team has gone public only when our relentless and quiet efforts have produced the desired results. But the current situation demands that I highlight our efforts at addressing the reconstruction of the Umuahia-Ikwuano-Ikot Ekpene Federal Road.

When I was elected to represent the good people of Ikwuano/Umuahia North/South Federal Constituency in 2015, the Umuahia-Ikwuano-Ikot Ekpene Federal Road was completely impassable such that commuters intent on accessing Akwa Ibom (and indeed some parts of Ikwuano) through the road had to pass through Ikwueke, Amizi, and Oloko, to look for alternative routes. It was a burden I came into office with and it was one of the first issues I addressed.

Series of engagements by me with the then Honourable Minister of Power, Works, and Housing, and currently the Minister of Works and Housing, His Excellency, Babatunde Raji Fashola began as far back as June 2016. Then, my first request, supported by pictorial evidence was for the Federal Government to rehabilitate the failed sections of the road so that the road can become passable. My second request was for the Federal Government to bring to an end the yearly ritual of palliative works on the road as it was no longer working and award the road for total reconstruction. HE Fashola agreed with me that the road was in bad shape and directed that FERMA should carry out palliative works on the road. The palliative works were done between December 2016 and April 2017. For a moment, our people heaved a sigh of relief.

The Honourable Minister also agreed with me that it was important to award the road for reconstruction. I continued to engage with him until the award of the contract for reconstruction in 2019 to Messrs Hartland Nigeria Limited/Raycon Nigeria Limited. The contractors mobilized to site late 2019 and started work. Unfortunately, due to non-provision of adequate funds by the Federal Government, they have pulled out.

It is important to place on record that from the moment the contractors started work till today, I have not relented in following up and calling for more funding to be made available to them. That is my work as your representative and that is what I have persistently done at great cost to me. The attached letters will show the persistent pressure I have mounted on the office of the Honourable Minister concerning this road. Similarly, I have also written to and met with the Managing Director of FERMA and other Directors in a bid to find temporary solutions while the reconstruction work is ongoing. I do not intend to stop mounting pressure until something is done. As the dry season sets in, it is my belief that FERMA would be able to quickly carry out palliative works on the failed sections again, while the contractors return to site.

The attached letters fill in the gaps from decisions made at my meetings with the Honourable Minister, and chronicle a journey which began in June 2016 (resulting in the rehabilitation of the failed portions of the road and the award of the contract for the total reconstruction of the road) and is still ongoing as I continue to mount the necessary pressure to see that this road is totally reconstructed.

I felt it was necessary to brief you all on our efforts so that you are assured that I have never and will never stop prioritizing your welfare. Leadership is a call to service and what gives me immense joy is to be able to serve you to the best of my ability and to the glory of God.

God will continue to guide and bless us.