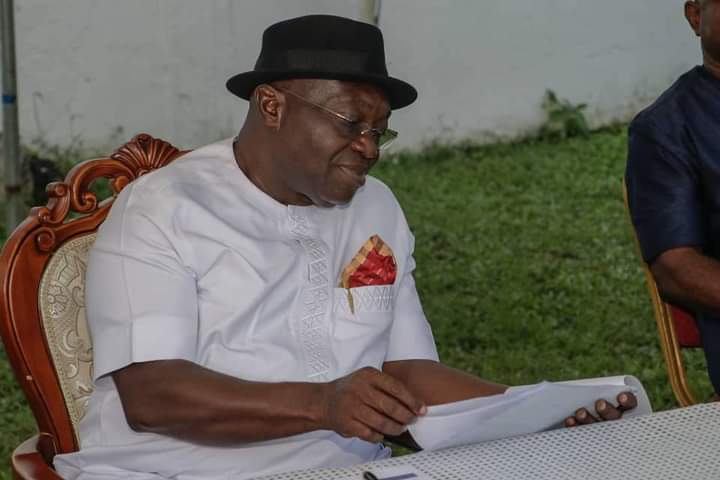 Governor of Abia State, Dr Okezie Ikpeazu’s administration has created platforms that will avail the citizens, especially the youths, the opportunity to aspire towards self-reliance and become greater leaders of tomorrow which is the essence of leadership.

Governor Ikpeazu stated this at his Aba Lodge while receiving in audience members of Maduforo Youths Movement who paid him a courtesy visit on Wednesday, 28th September, 2021. The Governor explained that his administration recognized the need to empower the youths on the rudiments of leadership in order to deepen democracy and moved ahead to conduct local government elections for two consecutive times now where youths of the state formed a majority part of those elected for various positions.

He said that his government was collaborating with the French government to establish a Youth Skill Acquisition Center at Nsulu in Isiala Ngwa North LGA while an engineering firm that will handle machines, especially the Chinese-made Automated Shoe Machines, will be set up at Umukalika in Obingwa LGA to serve the needs of the new Enyimba Automated Shoe Company and Enyimba Automated Garment Factory.

Governor Ikpeazu who challenged the youths to leverage on the establishment of cottage Industries an Indian firm is birthing in the 17 LGAs with five of them already established, disclosed that the SME Bank where his administration will make further provision of N100,000,000.00 (One Hundred Million Naira) is aimed at empowering mostly women and youths adding that his administration is interested in workable templates of empowerment ideas that will improve the economic status of its citizens.

“You may not know that we are building cottage industries in the 17 LGAs with an Indian company. They have established five in five LGAs as I speak now. We have also imported the machines for palm kernel oil, palm oil, rice mill, cassava processing machines among others. And I’m looking at when I will have young people who will take over these ventures”, he said.

The Abia State Chief Executive who disclosed the audacious moves taken to embark on most road projects in the state with four Grade A contractors despite the lean available resources, restated that the roads are of socio-economic importance and assured of his determination to realize the roads linking Ukwa East LGA through Obohia – Ohanku Road to Ukwa West LGA just as the contractor handling the Aba – Owerri Road has been mobilized back to site.

He attributed the failure of portions of Ekwereazu road to the original designation of the road as a trunk C road whereas the the road is currently taking trunk A traffic as a result of the continuing neglect of Aba-Ikot Ekpene highway by the federal government, noting that the State has remobilized the contractor because the road plays a critical role towards boosting trade and commerce in the state.

Furthermore, the Governor stated that work will soon commence on phase two of ABSUTH Road with Rigid Pavement (Cement) Technology and that the Osisioma Flyover will soon be commissioned so as to bequeath another long lasting project legacy to Abians.

The state Governor who encouraged the youths to galvanize their federal legislators to take up necessary advocacy efforts on those road projects related to the Federal Government however assured that he will consider their challenges that have economic impact and advised them to build integrity and be patriotic in their dealings. He used the occasion to announce a post graduate scholarship award to a member of the group, Mr Anucha Wisdom, to study for his doctorate degree.

Presenting an address earlier, the President of Maduforo Youth Movement, Mr Nwazuo Stephen said that the non political group is aimed at enthroning good governance, youth inclusiveness in governance and sustainable empowerment. He thanked the Governor for conducting local government elections that produced many youths as leaders at that very important level of governance; his infrastructural, health, education and security achievements all of which have helped to address social unrest in the state to a great extent.

He appealed for further empowerment of the youths in ICT and agriculture which are the alternative ventures for economic survival saying the group has a database with verifiable skilled members that can benefit from the empowerment programmes adding that more attention would need to be given to some roads in the state.

The Governor was later decorated as the Grand Patron of the Association while the Commissioner for Information, Chief John Okiyi Kalu, Permanent Secretary Ministry of Land and Survey, Mr Ikechi Aaron and some other aides of the Governor were present during the visit.