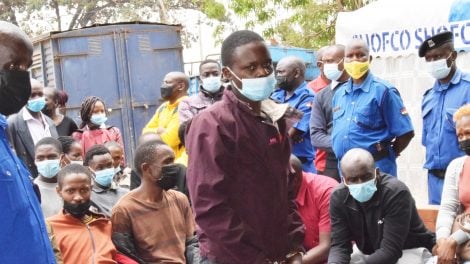 A man found with half a loaf of bread and juice stolen from a shop in Dagoretti is awaiting sentencing after he pleaded guilty to burglary and theft charges at the Kibera law courts.

Kennedy Kiarie admitted he broke into a shop and stole items worth Sh18,000 on October 2.

He admitted before chief resident magistrate Sharon Maroro of breaking into James Kimani Thiore’s shop and stealing from there bales of wheat flour, bar soaps, rice, cooking oil, loaves of bread, milk among other items.

He was also charged with handling stolen property where he was accused of dishonestly retaining a half loaf of bread, seven packets of juice, one yogurt, green packets of sweets, pencils, and washing powder.

The court heard that Thiore heard a commotion in the shop and went to check.

He found it having been broken in and saw someone leaving. Upon entry, he found the items missing and informed the police.

With the help of members of the public, police arrested Kiarie who had some of the items inside his house.

The court is awaiting his probation report before sentencing him.