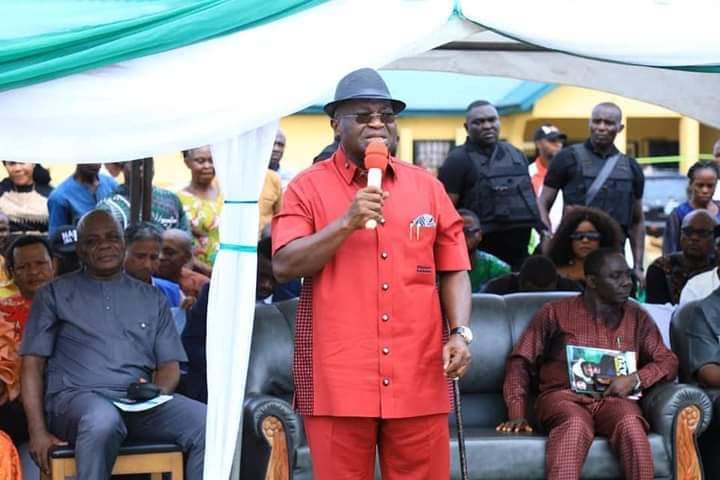 Governor Okezie Ikpeazu has emphasized the commitment of his administration to boosting basic education in the State as it remains the foundation upon which other forms and levels of education must stand.

The Governor stated this today as he commissioned the Abia Model Basic Schools & Multimedia Digital Teaching Programme at Osusu Amaukwa and also performed the ground breaking of the SMART SCHOOL Project at Umuajuju, designed to enhance quality teaching and learning in Abia schools.

The Governor also performed the official commissioning of the Headquarters Building of the Abia State Universal Basic Education Board (ASUBEB) at Ogurube layout, Umuahia.

Speaking separately during the events at Abia Model Basic School, Osusu Amaukwa in Obingwa LGA and Umuajuju in Isiala Ngwa South LGA, Governor Ikpeazu said the model schools would introduce the students and pupils to ICT and make them capable of competing with their contemporaries all over the world. He pointed out that the multimedia equipment would teach over 100 subjects to the school children and emphasised that for effective learning, schools must have good teachers, infrastructure and content stating that these he has made available in the Model Schools.

The Governor charged the teachers to acquaint themselves with the requisite digital know how so as to make effective use of the Multimedia Digital Teaching Programme established by his administration. He urged them to protect the equipment as they deploy them to upgrade the teaching and learning in the State.

Governor Ikpeazu, who announced that the modern mowers would be provided in all the LGAs also committed the mowers to the custody of the ASUBEB and instructed the board to ensure the mowers are used to assist the pupils cut grasses and protect them too. He stated that education remains a pillar and an enabler for citizens to be useful to the society, adding that present day education is dependent on technology for pupils to make them globally competitive.

Governor Ikpeazu said education has two important components, the hardware which deals on infrastructure and software being the content, capacity of the teacher and materials with which to work with and said that the new ASUBEB Headquarters Building which houses the reinvigorated Abia State Schorlarship Board and Continuing Education Centre is of strategic importance, adding that it is the good relationship between his predecessor and him that made it possible for the building to be realized.

In his speech, the Commissioner for Basic Education, Chief Ukwu Rocks Emma said the Multimedia Digital Teaching Programme is a pilot system and described it as a foundation that would take the State to higher heights. He said that the students under the digital learning would be able to compete with their counterparts all over the world and thanked Governor Ikpeazu for being educationally friendly.

In his address, the representative of Executive Secretary, UBEC and South East Zonal Director
UBEC, Mr. Franklin Ovbiagele
commended the Governor for his tremendous efforts towards the development of basic education, especially for commissioning the Abia Model Schools adding that the ground breaking of the Abia SMART school is laudable and would assist in e-learning.

Earlier, the Executive Secretary, Abia State Universal Basic Education Board (ASUBEB), Elder Josiah Anonaba said that the project which is located in the 3 senatorial zones of the State, at Ohafia, Umuahia, Osisioma and Obingwa, is a flagship project of Governor Okezie Ikpeazu towards reinvigorating modern technological advancement in Basic education, adding that the schools are envisioned to serve as reference schools that would signpost replicable standards for other public and private schools in the state.

The event attracted the presence of the former Deputy Governor, Chief Acho Nwakanma, SSG, Barr. Chris Ezem, Commissioners, Chief of staff to the Governor, Chief Okey Ahiwe , members of the Abia State Council of Traditional Rulers among other dignitaries.