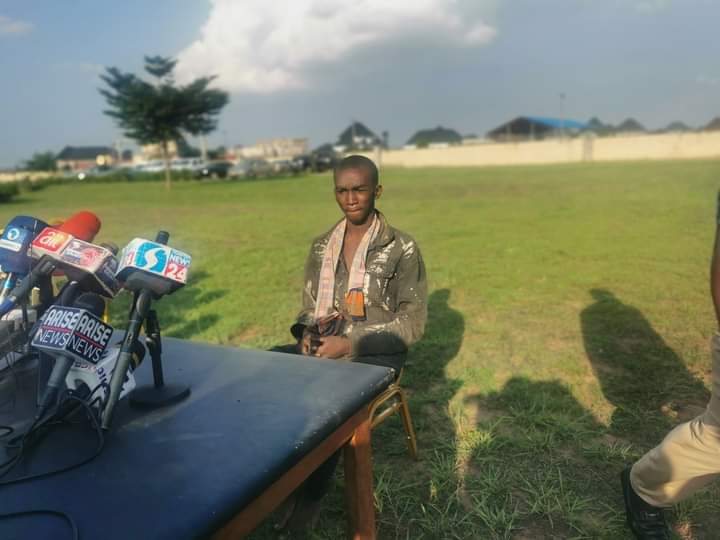 The Department of State Services (DSS) in Imo State has claimed that the alleged Awomamma 14 youths allegedly killed by the Ebubeagu Security Network were members of the Eastern Security Network (ESN), the militant arm of IPOB.

In an unsigned release made available to newsmen its headquarters in Owerri, DSS said, “It was a sting operation with the help of an ESN gang member, Chinonso Mmerem, earlier arrested by the operatives”

The release noted that the gang was gathered to plan for the enforcement of the illegal sit-at-home the following day, Monday 18 July, and subsequently opened fire on the sting operatives of the DSS and was consequently repelled with the superior firepower of the operatives, leading to the death of about seven of them” .

The DSS, director, Imo State Command then led newsmen to the alleged member of ESN in DSS detention, Mmerem Chinonso who allegedly took the DSS to the alleged hideout of his members whereupon the said gang members were shot to death.

Fielding questions from newsmen, Mmerem who said he hails from Amiri Ubahu Azu in Imo State confessed being a member of the Indigenous People of Biafra (IPOB) and its militia wing, the Eastern Security Network (ESN) for over a year. He said he was arrested by the DSS at his hometown about a week before the incident where he led DSS operatives to which is the hideout of his gang members.

On his involvement with Sunday’s incident where about 14 youths of Otulu youth were allegedly murdered in cold blood by alleged operatives of Ebubeagu, he said they led DSS officers to their new camp at Awomamma where they killed many of them and others escaped with bullet wounds.

He reveled how he information that the group was meeting at that spot on that fateful day, Having been in DSS detention for over a week, he said, “I know that if you want to catch them, it will be on a Sunday when they gather to plan on how to go and do work on Monday lockdown.

Mmerem who mentioned the names of some of their alleged members and some of their camps, including the one at Orsu Ihitteukwa which he described as their federal camp, said he has repented and called on all other youths who are still operating as members of IPOB/ ESN to repent from it, as according to him, there is no life there”.

However, Socio economic activities were brought to a halt in Awomamma and environs, Monday as women and youths protested the alleged massacre of 14 persons by alleged Ebubeagu security outfit.

The youths and women in their numbers blocked the ever busy Owerri, Onitsha road, mourning the killing of the 14 youths who they said were killed while returning from a traditional wedding.

The protesters carrying placards with different inscriptions insisted that peace will only return in the state when government disbands Ebubeagu.