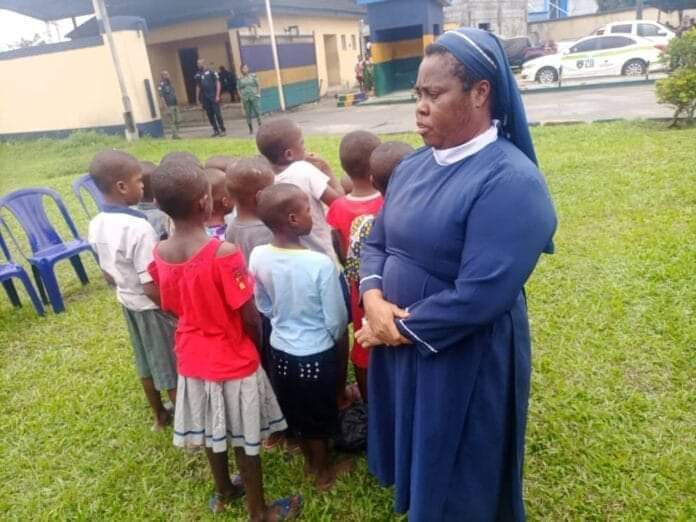 A fake Reverend Sister has been arrested by the Rivers State Police Command in Aluu, Ikwerre Local Government Area of the State over child trafficking on Tuesday.

The yet-to-be-identified woman was found with fifteen children whom she buys between N30,000 to N50,000 and sells to her clients.

Speaking with newsmen in Port Harcourt on Tuesday, the State Commissioner of Police, Eboka Friday revealed the woman’s house was searched after receiving credible information on her illegal activities and the fifteen children were rescued.

According to one of the children, he was kidnapped from Bayelsa state and taken to the woman who kept him with other children for some time before he was sold to a lady who took him to Lagos State. Months later, he was returned to the buyer for being ‘too sharp.’

The CP also said another child explained that she and her other two siblings were with their mother at Ada-George when they were kidnapped and brought to the Rev. Sis. Two of the children were later sold and their whereabouts are still unknown.

He stated that another of the rescued kids revealed that she was abducted from Mile 1 and brought to the woman.

The CP noted that the suspect is being economical with the truth despite recovering a lot of fake documents from her.

He assured that the matter will be properly investigated and the suspect charged to court upon conclusion of the Investigation.