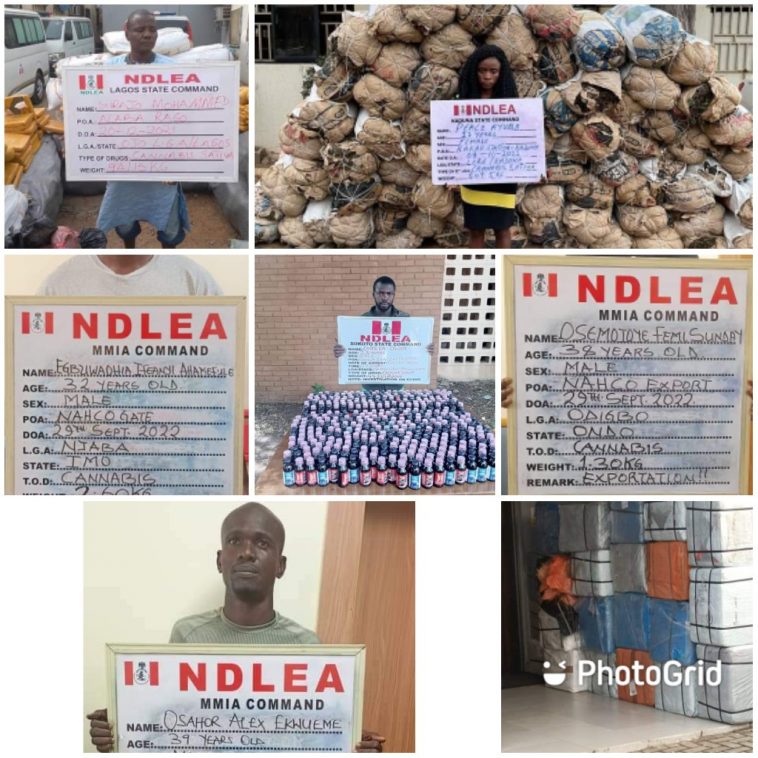 Desperate attempts by the tramadol drug cartel to smuggle into Nigeria over Two Million Four Hundred and Sixty-Five Thousand (2, 465, 000) tablets of the pharmaceutical opioid in 225mg and 250mg, weighing Two Thousand, Three Hundred and Fifty Six kilograms (2,356kgs) with an estimated street value of One Billion, Forty Million Naira (N1,040,000, 000) through the Murtala Muhammed International Airport, MMIA, Ikeja Lagos have been foiled by operatives of the National Drug Law Enforcement Agency, NDLEA.

The seizure of the drug on Friday 7th October came barely a week after about 13.5million pills of the same opioid worth over N8.8billion were recovered by NDLEA operatives from one of the mansions of a billionaire drug baron in the highbrow residential estate, Victoria Garden City, VGC, Lekki Lagos.

Following credible intelligence, the Agency had shown interest in the consignment of 52 cartons that came into Nigeria from Karachi, Pakistan with six different airway bills via Ethiopian Airline flight, comprising seven cartons of 250mg of a brand called tamral and 45 cartons of 225mg, branded as tramaking.

Soon after its arrival at the Lagos airport, the NDLEA called for a joint examination of the consignment with other stakeholders and after its information was confirmed by all, the 52 cartons of the seized substance which are above the recommended threshold for medical use and banned in the country, were moved to the Agencys facility.

In the same vein, another bid to export through the airport 15 parcels of cannabis and 600grams of tramadol 225mg concealed in a sack of crayfish to Dubai, UAE was equally thwarted by operatives who seized the consignment and subsequently arrested a freight agent, Osahor Alex Ekwueme, who presented it for export.

Weeks after NDLEA operatives intercepted 5.20kgs of cannabis concealed in kegs of palm oil going to Dubai at the NAHCO export shed of the airport, the brain behind the consignment, Ifeanyi Egbuwaohia, has been arrested in Igando area of Lagos. Though Ifeanyi works as a technician at Computer Village, Ikeja but beneath his known business he also works with a drug network in Dubai, where he sends illicit drugs for distribution. Few hours after his arrest, another consignment of 2.60kgs of the same substance sent by him for export to Dubai was also intercepted by operatives at the airport.

Another consignment of 1.30kgs of cannabis concealed in reconstructed engine blocks going to Dubai have also been seized at the SAHCO export shed while two persons: Olatunji Kehinde Temiola and Osemojoye Femi Sunday have been arrested in connection to the bid.

Ten months after his arrest by NDLEA, a notorious drug dealer in the Alaba Rago area of Ojo, Lagos, Alhaji Surajo Mohammed has been convicted and sentenced to seven years imprisonment by a Federal High Court in Lagos presided over by Justice Yellin Dogoro. Suraj was arrested with 941.15kgs cannabis on Monday 20th December 2021 and arraigned in court in charge number FHC/L/370c/2021. In his judgment delivered on Thursday 6th October 2022, the Judge however gave the convict an option of a seven million naira fine.

While commending the officers and men of the MMIA, Kaduna, Sokoto and Lagos command for the feats, Chairman/Chief Executive of NDLEA, Brig. Gen. Mohamed Buba Marwa (Retd) urged them and their compatriots across the country to remain steadfast, resolute and unrelenting until the last gram of illicit drugs is taken away from the streets of Nigeria.