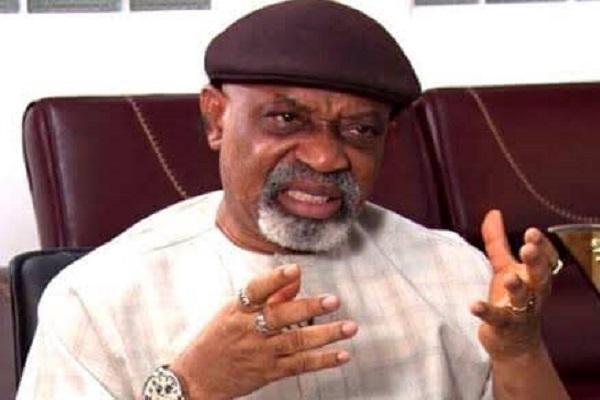 The Minister of Labour, Dr Chris Ngige has said that the administration of President Muhammadu Buhari will no longer tolerate industrial strikes that do not follow due process, particularly during the transition period of the current administration.

A statement by the ministry of labour disclosed this on Thursday.

The minister made the remarks shortly after receiving an ‘Award of Excellence conferred on him by the Nigerian Association of Resident Doctors (NARD) at its 42nd Annual General Meeting/Scientific Conference.

As NARD called for the review of the Consolidated Medical Salary Scale (CONMESS) wage structure and the correction of “minor errors” in the circular on the upward review of the Medical Residency Training Fund (MRTF), non-taxation of the call-duty allowance and complained about the non-payment of the new hazard allowances to house officers, Mr Ngige said that a committee at the federal health ministry was already working on that.

“It (committee) will swing into action next week to dialogue with the resident doctors and members of the Joint Health Sector Union (JOHESU),’’ stated the labour minister.

Mr Ngige stressed that there was no need for the doctors to issue a strike threat when the government had put a process in motion to address their concerns.

“The federal government will no longer tolerate a strike that does not pass through due process. Any group that embarks on strike will be visited with section 43 of the Trade Dispute Act (TDA), Laws of the Federation of Nigeria (LFN) 2004,” added the labour minister. “It says that when a worker goes on strike, especially those on essential services, the employer can also refuse to pay compensation or wages which accompany work done.”

He insisted that the due process of a strike “is that social dialogue negotiation with employers should be explored first” and “in the event of failure,” the labour ministry should be notified and, “finally, a Trade Dispute Notice (TDN) served.”

Mr Ngige advised all aggrieved unions to imitate the doctors and commence proactive discussions with the federal government rather than resort to strike.

According to the labour minister, the National Salaries, Incomes and Wages Commission is working on the upward review of the Medical Residency Training Fund (MRTF).