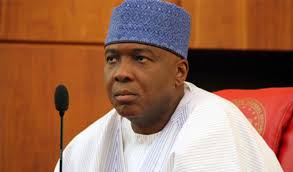 A group of northern leaders, under the auspices of the Northern Leaders and Stakeholders’ Assembly, on Wednesday met with the Senate President, Bukola Saraki.
The meeting, which was held in the National Assembly Complex, Abuja, was behind closed doors.
A list of attendees obtained by our correspondent had on it a former Liaison Officer to President Shehu Shagari in the Second Republic, Alhaji Tanko Yakasai (Chairman); a former Deputy Senate President, Ibrahim Mantu (Deputy Chairman); and Aliyu Ardo (Secretary).

At the meeting with Saraki, Yakasai took a swipe at the Buhari-led administration, saying that Nigerians were losing confidence in northerners to effectively manage the country.
He said, “Given that today, all across Nigeria, there is a palpable disquiet, distrust and loss of confidence by the mass populace in the nation’s political class, a situation that is both creating a serious threat to the survival of democracy in the country and the nationwide loss of confidence in northerners to effectively direct the affairs of this country, we see it as a matter of urgency that northerners of good standing come together to arrest the drift, recapture national power, redeem the battered image of the northern political class and rebuild confidence in our ability to effectively pilot our democracy.


“One of the reasons for the formation of the NLSA is to help attain this noble feat for the North. However, Saraki, in his remarks, told the northern leaders to join hands with the Federal Government in finding a lasting solution to the incessant killings taking place in the country.The Senate President, according to a statement by his Chief Press Secretary, Mr. Sanni Onogu, noted that peace and unity were essential to achieving the overall development of the country. He commended the group for rising up to contribute their quota to realising a peaceful and prosperous country.
Saraki said, “By this time, as elders, you ought to be resting, but the patriotism in you brought you out. You said you are political but non-partisan, we are all political and we need to get Nigeria in the right direction.

“Something somewhere is wrong. We need to meet to bring about peaceful coexistence and unity in this country. Part of the solution is to know that something is wrong.
“I am happy that you are here and we will speak the truth about the problems and conduct ourselves on how to encourage dialogue and ensure that the right thing is done.”
Copyright PUNCH.