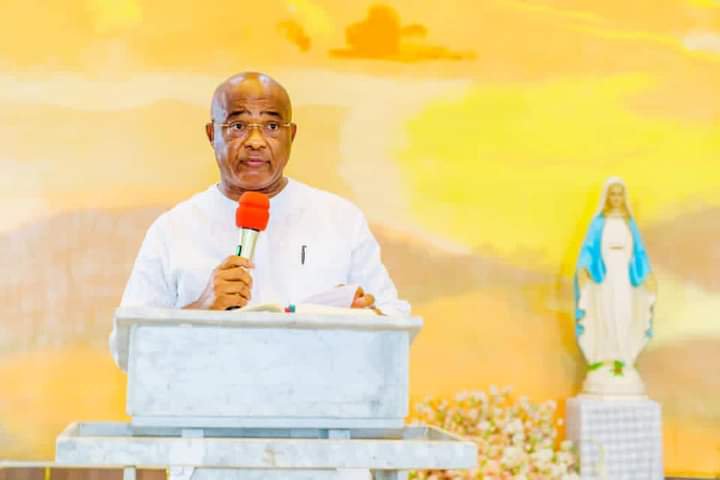 His Excellency Senator Hope Uzodinma, Governor of Imo State, has assured Imolites that he is dedicated with his life in ensuring that lives and properties of Imolites are safely secured, opining that all security challenges threatening the peace of the State have been defeated.

During the Sunday service at the Imo State Government House Chapel, His Excellency, Distinguished Senator Hope Uzodimma addressed Imo people on the victory of Ndi Imo as the Security agencies yet again repelled an attempted attack on the Imo State Police Headquarters.

Governor Uzodimma in his statement disclosed that there was an attempt by the same group of unknown men to release some people under the custody of the police, particularly most of those ones that made confessional statements.

Governor Uzodimma in thanksgiving to the Almighty God also enjoined Ndi Imo to pray and be thankful to God as He has taken control of the security situation “ in our dear State, Imo “.

“I wish you a very happy sunday and urge you to join the government of Imo State to continue to thank Almighty God for haven taken control of the security situation in Imo State.” Uzodimma stated.

The Governor further disclosed that Security agencies were able to not only repel them, but apprehended all of them and recovered 7 Ak47 riffles, 3 pump action guns, and one bus load of explosives that was supposed to be used to burn the place.

His Excellency, making a heartfelt plea, stated to Imolites “I know it is not easy…We are paying the price of the callous nature of some people and the hostility we don’t deserve that is being visited on our people”.

He also used the opportunity to once more reassure the people of Imo State that government is on top of the security situation in Imo State and people should go about their normal businesses without fear of molestation.

“Government will not fold its hands and allow the security and welfare of our people to be trampled upon” Uzodimma stated.

He added that Government will do everything possible to step up all actions to ensure there is peace and tranquility in Imo State and our economy will not diminish by the grace of God.