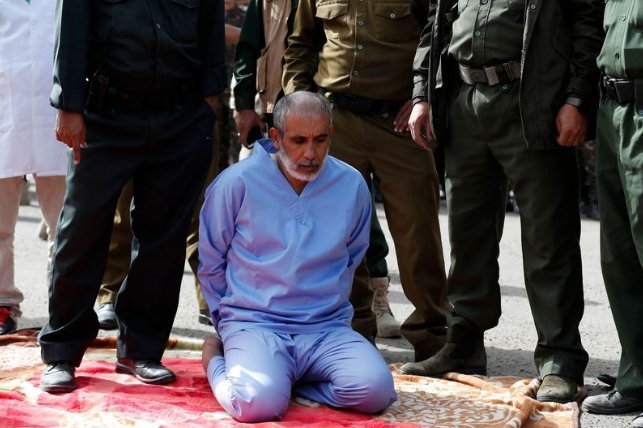 A dad identified as Ali Abdullah al-Noami has been publicly executed after being found guilty of murdering his three daughters.

Abdullah left his three daughters Rahaf, 7, Raghad, 12, and Malak, 14, to drown in a water tank after a row with his wife.

Along with two other convicted child-killers – Abdullah Ali al-Mukahali, 38, and Mohammed Abdullah Arman, 33 – the forty-year-old was led out into Tahrir Square in the centre of Yemen’s constitutional capital Sana’a and made to kneel on a red carpet.

An executioner wielding a Kalashnikov AK-47 assault rifle then shot all three men in the back in full view of a large crowd of spectators, some of whom were filming the executions on their mobile phones and video cameras.

Abdullah Ali al-Mukahali and Mohammed Abdullah Arman had been convicted of raping and killing an eight-year-old boy named Mohammed al-Haddad.

Current laws in Yemen allow the death penalty for a wide range of crimes including murder, kidnapping, rape, adultery, homosexuality, and a number of religious offences.

After the three men were shot, a medic quickly checked each body to ensure that they were all dead.

All three bodies were wrapped in white body bags, which soldiers in camouflage uniforms then carried away.

It was the first public execution in the city since August 2018, when three men convicted of raping and killing a child were shot, and then had their bodies displayed hanging from a crane.

While many countries retain the death penalty, most notably China which executes more of its convicts than the rest of the world put together, only a handful carry out public executions.

North Korea and Somalia have been known to publicly execute convicts, along with a handful of Arab counties including Iran, Syria, Saudi Arabia, and Hamas-held regions of Palestine.

Yemen currently has two rival governments, one based in Sana’a under the control of Iranian-backed Houthi rebels and a second one controlled from Aden.

There has been tension between Yemen’s northern and southern territories for generations but the current split dates from 2017.