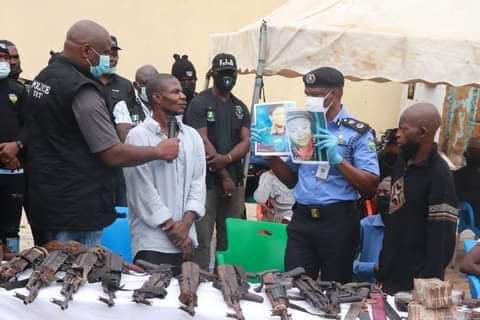 36 notorious criminal syndicate responsible for recent economic sabotage and vandalism of rail tracks in the North-West and North-Central parts of the country have been arrested by the operatives of the Nigeria Police Force.

According to the Force Public Relations Officer, Frank Mba, the ‘arrest of the suspects follows deliberate efforts by the Force to contain and clamp down on perpetrators of recent incidents of rail tracks vandalism, carting away of critical locomotive equipment and other related economic crimes in some parts of the country.

The suspects involved in the rail track vandalism, Idris Lawal ‘m’ 42years, Abdullahi Musa ‘m’ 29years and Usman Umar ‘m’ 22years were arrested following a coordinated intelligence-driven special operation on 27th May, 2021, which uncovered a warehouse in Gboko LGA of Benue State. A cordon and search operation conducted by the Police operatives on the building revealed different vandalized rail equipment, stolen rail installation racks, weld-shear, rail puller, other rail accessories and consumables. Further investigations by the Police team led to the interception of three (3) heavy-load trucks along Ikom-Ibom junction in Cross Rivers State. The trucks were fully loaded with vandalized rail items transported from the warehouse. Investigation is ongoing to identity the destination, the targeted criminal receivers, end-users and other suspects complicit in the crime.

All the suspects will be charged to court on completion of investigations.’