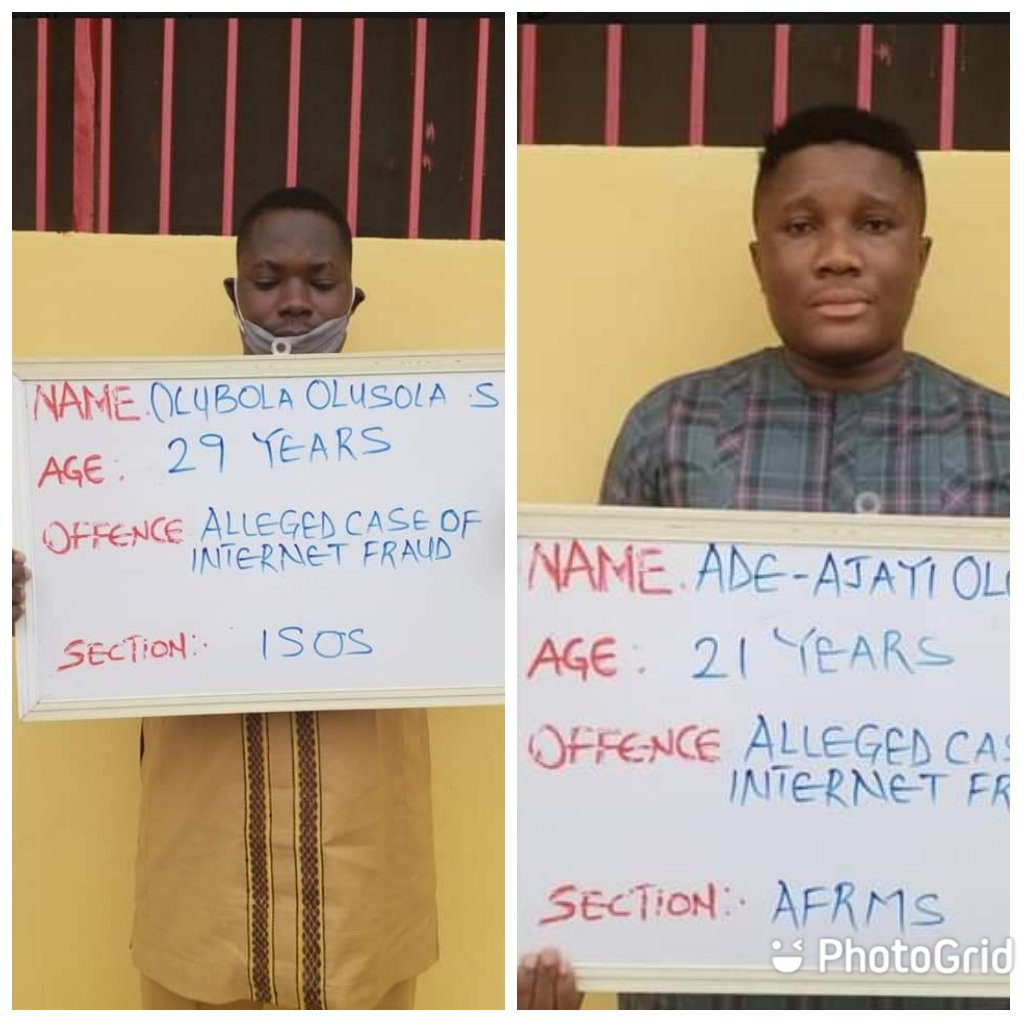 Justice Muhammed Sanni of the Federal High Court sitting in Ilorin, on Thursday, July 15, 2021 sentenced a staff of Ekiti State Universal Basic Education Board, SUBEB, Olubola Olusola Sunday and one Ade-Ajayi Oluwatobi, a graduate of Ekiti State University, EKSU, to various jail terms having found them guilty of offences bordering on cybercrime.

Olubola, 29, was prosecuted on three counts and sentenced to 18 months imprisonment, while Ade-Ajayi, 19, bagged one-year jail term, having pleaded guilty to a separate one-count charge preferred against him by the Ilorin Zonal Office of the Economic and Financial Crimes Commission, EFCC.

The duo were arraigned on Thursday by the anti-graft agency.

Count one of the charge against Olubola reads: “That you, Olubola Olusola Sunday (Alias: Mic Porter) sometime in February 2018, at Ado-Ekiti, within the judicial division of the Federal High Court, with intent to defraud, sent electronic messages materially misrepresenting facts of being Mic Porter, a white male vide micporter35@gmail.com upon which reliance, one Mega Johnson is caused to suffer loss of $1, 000.00 (One Thousand USD) received through Western Union money transfer and you thereby committed computer related fraud contrary to and punishable under Section 14(2) of the cybercrimes (Prohibition Prevention, etc) Act, 2015.”

For Ade-Ajayi, particulars of the count against him read “That you, Ade-Ajayi Oluwatobi (a.k.a Stacy Erisman) sometime in April, 2020 at Ado-Ekiti, within the judicial division of the Federal High Court, did fraudulently impersonate one Stacy Erisman with intent to gain advantage to yourself from one Umar Farouk who chatted vide your email; stacyerisman9@gmail.com and thereby committed an offence contrary to Section 22(2) of the Cybercrimes ((Prohibition Prevention, etc) Act, 2015″ and punishable under Section 22(2) (b) (iv) of the same Act.”

Following their pleas, counsel to the EFCC, Andrew Akoja, reviewed the facts of the two cases through Olasode Olumide and Emezie Peter Kachi, both operatives of the Commission, against Olubola and Ade-Ajayi, respectively.

The two witnesses, in their separate testimonies told the court how the defendants (now convicts) were arrested in Ado-Ekiti based on credible intelligence reports. They tendered documents which included statements of the defendants, 2 iPhones, First Bank manager’s cheque (bank draft) of N417,000 (Four Hundred and Seventeen Thousand Naira Only), photocopies of particulars of the vehicle recovered from one of the defendants and its key.

Akoja, thereafter urged the court to convict the defendants based on their pleas and the evidence placed before it.

In his judgment, Justice Sanni said the prosecution proved the two cases beyond reasonable doubt, citing the pleas of guilt entered by the defendants, the testimonies of the prosecution witnesses, exhibits tendered and plea bargain agreements.

Consequently, the judge sentenced Olubola to six months imprisonment on each of the three counts against him, to run concurrently. He, however, gave option of fine of N100,000 (One Hundred Thousand Naira) on each count.

He also ordered the forfeiture of the iPhone, First Bank manager’s cheque (bank draft) of N417,000 (Four Hundred and Seventeen Thousand Naira Only) to the Federal Government.

In sentencing Ade-Ajayi, Justice Sanni gave him a term of one year imprisonment with option of fine of N500,000 (Five Hundred Thousand Naira Only).