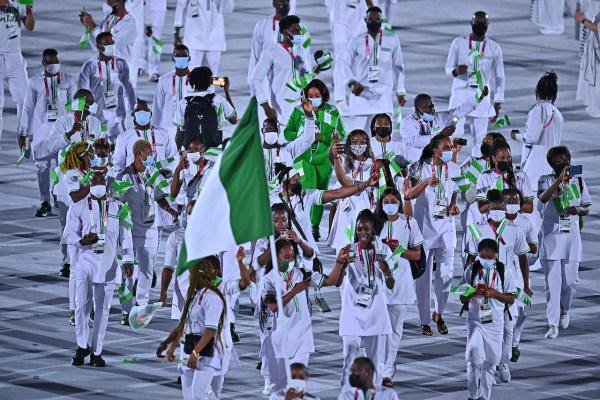 That was an incredible opening ceremony of the Olympics yesterday in Tokyo – simply out of this world!

I should be in Tokyo, Japan, by now, but I am not. I readily accepted an invitation to attend the 32nd Olympiad as an observer when it was offered me. That was over a month ago.

For the first time since Atlanta ’96, I looked forward to going to the Olympics again. My motivation this time is the historical significance of Tokyo 2020 as a result of the global circumstances that have changed not only the world the way we knew it but have also birthed a completely alien ambience around the Games that makes them, potentially, an Olympics like no other in history.

For that reason alone, it is worth being in Tokyo to experience, record, and document for posterity.

This is the Olympic Games without the usual sea of travelling tourists, without home fans, with everyone with a face mask looking like Superman, with as many cameras as people are covering every inch of the Games.

The sale of alcohol is banned in bars and restaurants everywhere, with the threat of the dreaded Delta variant of the Coronavirus hanging over the heads of the 80,000 visiting athletes and officials within the bubble of the Olympic Village that could become super-spreaders to the 204 countries from all over the world that have sent contingents here when they return to their countries.

Unfortunately, the health threat posed by the increasing scourge of the Covid -19 pandemic in the city of Tokyo, would not allow that my unofficial assignment is a good enough reason to be granted a visitor’s visa and allowed into the Olympic bubble.

In short, my clout in sports amounted to nothing when it came to the issue of visa clearance to attend the games. I have had to shelve the idea of physically attending an Olympic Games that had created historical antecedents even before it began.

However, my idea of documenting the Games, if only for posterity, is to cover, at least, the behind-the-scene activities of the Nigerian contingent, and to keep the records in trust for future generations.

Now that I will not be in Tokyo, my imagination and creativity are being tested and I have to come up with new out-of-the-box possibilities, using new technological tools available today that were not even in the realm of imagination some 41 years ago when I went to my second Olympics and we were faced with a slightly similar situation, in the need to document history.

At the Olympics in Moscow in 1980, when the USSR was still a pure communist enclave, and its relationship with the USA was at its lowest ebb because of Russia’s invasion of Afghanistan, the games were organised under the strictest and most bizarre conditions.

The fear of terrorism had been engraved in the Olympic Games since the Munich ’72 massacre of Israeli athletes and was still lingering in the air by the summer of the Moscow Olympics. So, the games were held in a secluded bubble, with the tightest security architecture imaginable. Security cameras were everywhere including in athletes’ rooms. Nothing escaped the prying eyes of the KGB, the secret service of the USSR. There was no absolute freedom of movement even within the games village with restrictions of visitors and venues.

Challenge for the media

Under those conditions, it was almost impossible for any reporter to do much work during the games. Nigerian journalists were restricted to match venues, the media centre, and their hotel rooms only.

We never saw a single Nigerian journalist or any journalist for that matter in our Games Village throughout the entire Olympics. The only place you saw them from a distance was at the competition venues.

Owolabi Ilori and ‘The Telephone’ So, with only a telephone in his bunkered hotel room in Moscow in 1980, a Nigerian journalist, late Owolabi Ilori, a well-known columnist came up with the idea of a daily diary of the Olympics.

Confined to the narrow world of the 4 corners of his hotel room, he had to be ingenious to make the best of the situation to get any reports.

The entire environment of the Games Village was perfect for anything but memorable. It was boring, restrictive, oppressive, and devoid of any serious sporting activity. It was fertile for a creative mind to start to imagine what could be going on behind the curtains in the Games Village, the centre of all activity.

The Nigerian camp became a theatre of crisis for some reason – the issue of a particular female athlete, a beauty queen in Nigeria, that some athletes argued did not deserve to be in the Athletics team but was selected because of her multiple relationships with a doctor, and some other official in the contingent, provided the ingredients for the unhealthy rumour.

It became a perfect setting for a scandal. To compound matters, Nigerian athletes were not winning anything anywhere to report. Even the football team, African champions before the games were shadows of themselves.

When rumour combines with poor performance the result is a perfect menu for a scandal.

Owolabi Ilori seized upon the opportunity of that situation and escalated it into a major crisis in his report. By the time he added some fiction and spiced it all up he had the reading public in Nigeria salivating.

With only the telephone in his room that he had to pay for through the nose, considering how expensive it was then, as his tool, Owolabi was in a foul mood. He started to work the phone to contact anyone ‘contactable’ in Russia – some athletes, officials, members of disgruntled government officials who could not gain access to any part of the games, and coaches. He never revealed the identities of those that fed him with his stories.

Through the motley of these contacts, he created mouthwatering scenarios of things going on in the games village straight out of ‘The School of Scandal’.

That gave birth to “The Telephone”, Owolabi Ilori’s masterpiece of creative writing. It won awards. The tragedy is that most of it was fiction. The greater disaster is that it became the cause of the disintegration of everything that was designed for sports development by the National Sports Commission under Isaac Akioye, who was in charge of Nigerian sports at the time. The iconic sports administrator became Moscow Olympic’s’ first and major ‘casualty when the contingent eventually returned to Nigeria.

Akioye lost his job as a result of the commission of inquiry that was set up to probe the Moscow Games. Until he died Isaac Akioye, the greatest sports administrator in Nigeria’s sports history, never forgave the country for the treatment meted out to him after Moscow ’80. He retired from society, started to live a reclusive life, and died with bitterness in his heart. It all started from Owolabi Ilori’s ‘The Telephone’ series, reports from his hotel room at the Moscow Olympics in 1980.

What all this means is that no matter how restrictive the Olympics maybe, a creative mind would always find a way to bring reports that would interest the people. It does not always have to be negative any way before it is interesting.

Where would the stories come from of what is a history game even before it starts? I am determined to be a part of it only to document it for posterity. I cannot be there physically. Yet, I have to be there, somehow, to feed Nigerians with the diet of great stories that will come from a unique Olympic Games in human history.

That is what this is all about. I shall be deploying all the tools available to an adventurous writer to keep a daily diary. The ‘Fly on the wall’ of the Super Eagles at the last African Cup of Nations did a fantastic job (remember?).

This time, I am deploying an ‘Eye’ perched on an Eagle that will hover over the Olympic Village in Tokyo, and over the athletes from Nigeria, to bring you entertaining reports. No scandal this time, hopefully, I assure you, just the fascinating stories of the life of athletes at the Olympics.