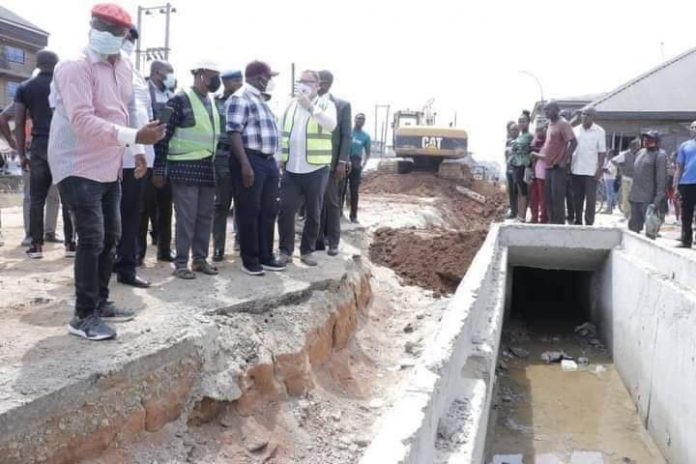 a. Reconstruction of Ngwa, Uratta and Obohia Roads as part of the World Bank project.

b. Reconstruction of Ohanku and Cemetery Roads with drains, to be funded by the state government to align drains and also end flooding of Cemetery market, provide good access road along Ohanku Road which was left in a mess by APGA and remains in very terrible state. Those two projects will have drains that will flow into the mega underground drain envisaged with the World Bank project so the pace of work of the state funded projects must align with the emergency project of the global funding institution.

c. Establishment of underground drainage system using a Tunnel Boring Machine (TBM) for the first time anywhere in Nigeria to ensure that houses along the path of the NEWMAP drainages are not knocked down within the high population density areas of the city.

d. Connection of Ngwa Road to Opobo junction area of Ogbor Hill to ease traffic on waterside bridge which the state government undertook and is funding.

e. Reconstruction of Ngwa Road market in phases to ensure safety and protection of the traders as part of the mega efforts to bring about a new city within the area popularly called “azu Aba” (back of Aba or Aba slum).

I have taken time to detail all these because of the tendency of professional politicians and political professionals to mislead and obsfucate facts to achieve their anti-Abia political objectives. Indeed, there is nothing I’ve stated here that is not available within the public sphere in the state and only those conspiring to punish the people of Abia State for their political choice in 2015 and 2019 will claim ignorance or attempt to use subterfuge to sabotage the project of the people of the state.

The people of Aba South State Constituency and Ndi Abia in general must now rally round Governor Ikpeazu to reciprocate his goodwill, that of his government and party, the PDP, of focusing on delivering to them in the midst of several attempts at distracting him and sabotaging the Ndiegoro project by those who obviously do not mean well for them and the state.

There is absolutely no cause for alarm except that our people must remain alert and prayerful against the devices of the enemies of progress.

-John Okiyi Kalu is an Aba boy and citizen of Abia State.