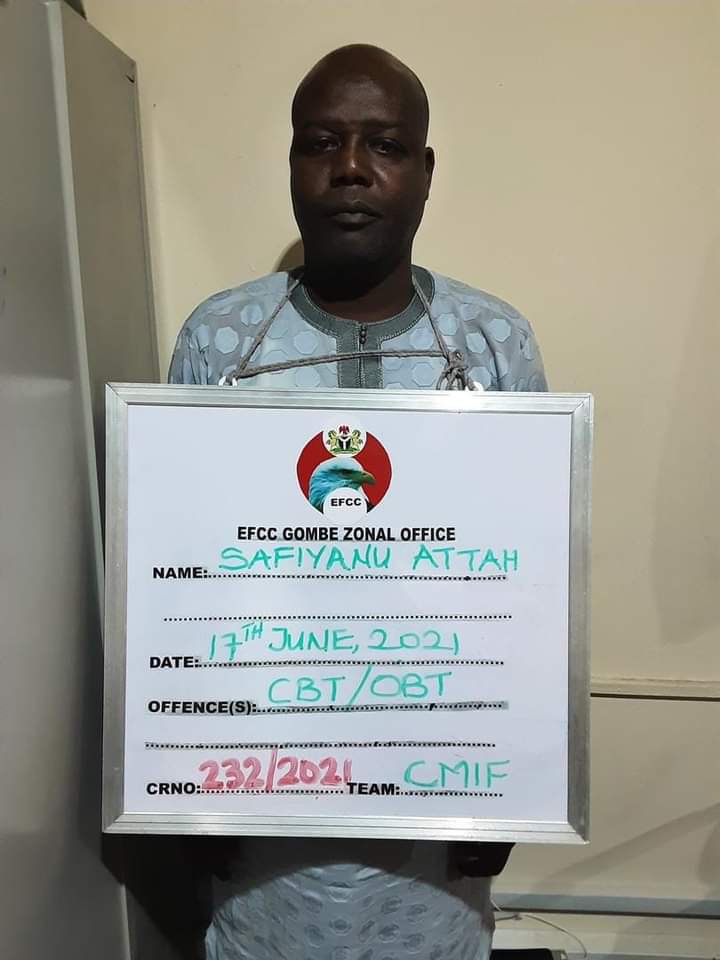 The Gombe Zonal Command of the Economic and Financial Crimes Commission, EFCC, Gombe Zonal Command has secured the conviction of the duo of Mohammed Abdullahi and Safiyanu Attah for six months and one year imprisonment respectively on separate charges of employment fraud.

They were prosecuted before Justice S.Y. Abubakar of Gombe State High Court for employment fraud, contrary to Section 320 of the Penal Code and punishable under Section 322 of the same Law.

Abdullahi was convicted on July 15, 2021
but given the option of N20, 000 fine. The Judge took cognizance of the fact that he had already restituted the victim in full.

The convict posing as an officer of the Nigeria Immigration Service tricked his victims into paying him Two Hundred and Eighty Eight Thousand, Five Hundred Naira (N288, 500.00), after he told them that he had been given five job slots at the Service. It dawned on the victims that they had been scammed when they discovered that he was not an Immigration Officer.
Similarly, Safiyanu Attah was arraigned on 27 July 2021 on one count charge of cheating punishable under Section 322 of the Penal Code. The defendant in collusion with one Mohammed Sani Dabo (now a convict), obtained the sum of N2,500,000.00 (Two Million, Five Hundred Naira) from one Abubakar Bala Ibrahim by falsely representing to him that they could get him a job at National Research and Development Agency through a Director in Revenue Mobilization Allocation and Fiscal Commission.

He pleaded guilty to the charge preferred against him and was convicted and sentenced to one-year imprisonment with an option of a Fifty Thousand Naira (N50, 000.00) fine.

He was further ordered to fully restitute the victim of the total sum involved in the fraud.