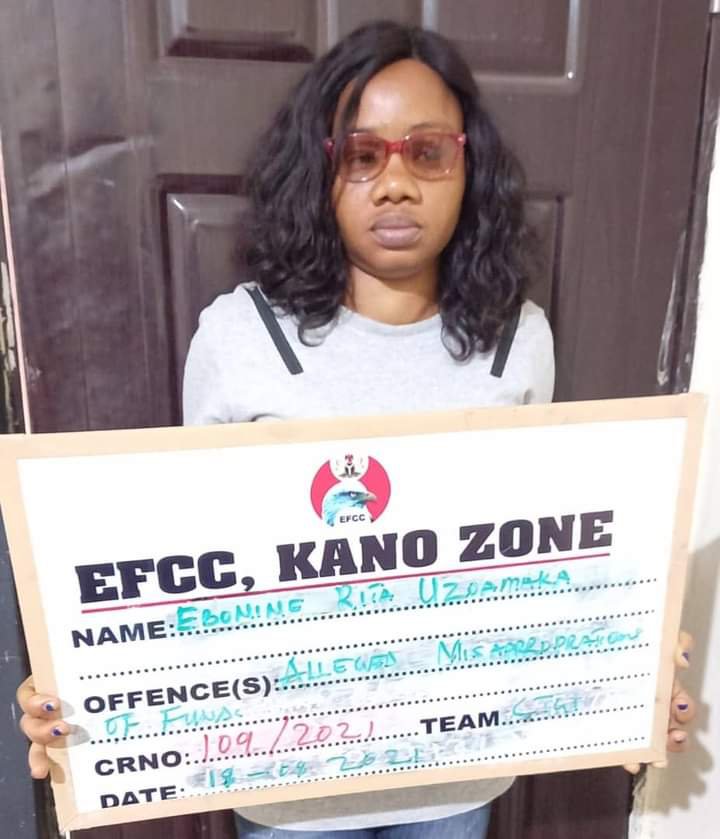 The petitioner, Ochayi Anthony Eneche, was allegedly persuaded to invest the sum N5, 660,000 (Five Million Six Hundred and Sixty Thousand Naira in a business by the defendant, a colleague of his at Sonia Food Industry Limited Lagos. After making the payment into an Access bank account of the defendant, he was assured that the goods will be delivered in three days but the promise was not kept. Investigation revealed that on 26th February, 2021 the defendant informed the complainant that his goods were already in Kano with FG Logistic Transport Company. He went there the next day but found no trace of the items.

The charge read, “that you EBONINE RITA UZOAMAKA on or about 15th to 23rd January, 2021 at Kano within the Jurisdiction of the Honourable Court dishonestly misappropriated certain property to wit: the sum of N5,660,000.00 (Five Million Six Hundred and Sixty Thousand Naira Only) belonging to Ochayi Anthony which you caused to be paid into your bank account number 0093030293 domiciled with Access Bank Plc for the supply of D-Rice Baking Powder from Aba Abia State and you thereby committed an offence contrary to Section 308 and Punishable under Section 309 of the Penal Code.

The defendant pleaded “not guilty” to the charge.

In view of her plea, prosecuting counsel Salihu Sani asked the court to remand the defendant in a Correctional Facility and fix a date for trial to commence.

But the defence counsel, urged the court to allow the dependent to continue with the administrative bail earlier granted her by the EFCC. He added that the defendant is in the process of settling the matter with the nominal complainant.

Prosecution counsel informed the court that he was served with the bail motion this morning and he needed time to respond. Sani added that the Commission was not a party to the settlement mentioned by the defence counsel.

Justice Sabo ordered the defendant to continue on administrative bail granted her by the EFCC pending the hearing and determination of her bail application.

The matter has been adjourned till October 7, 2021.