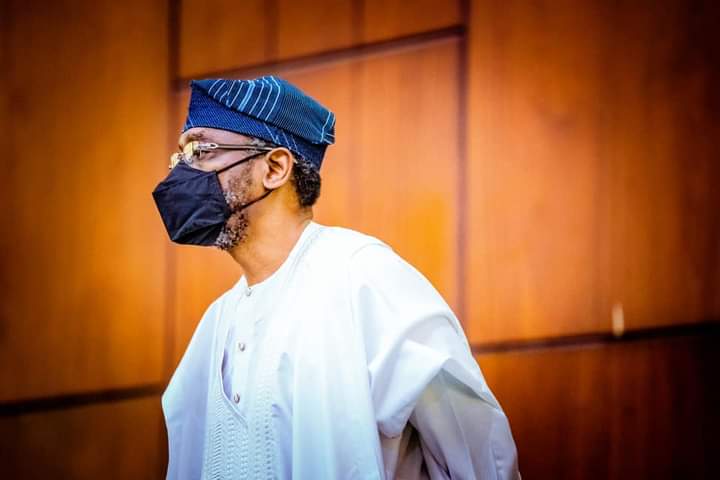 The Speaker of the House of Representatives, Femi Gbajabiamila has debunked reports that he compared separationists agitators, the Indigenous Peoples of Biafra and Yoruba Nations to Boko Haram.

In a statement made available by his Special Adviser on Media and Publicity, Lanre Lasisi, on Wednesday, he revealed that the Speaker didn’t mention any group but rather used the words, ‘Miscreant and Criminals.’

“It has come to the attention of the Office of the Speaker, House of Representatives, that some media reports on Wednesday, September 15, claimed that the Speaker, in his welcome address to his colleagues at Wednesday’s plenary, purportedly said IPOB and Yoruba nation agitators are the same with Boko haram.

In view of the impression created by the said reports, it has become necessary to clarify that the Speaker, in his speech, never mentioned any group.

For the records, the Speaker said some miscreants and criminals are taking advantage of the separationist agitations to carry their activities.

Hereunder is what the Speaker said:

“We must now add to these concerns an emerging threat that presents the same clear and present danger. In the South of Nigeria, East and West, MISCREANTS AND CRIMINALS MASQUERADING AS SEPARATIONIST ACTIVISTS have emerged to wreak havoc, take lives and commit economic sabotage against fellow Nigerians and the state.

“These people, in their inclination for devastating violence against fellow citizens, their appetite for the destruction of private property, their disruption of academic activities, commerce, and industry, their propensity for defiling institutions of the state, society and community, their refusal to engage in debate, or to consider the possibility of dissenting opinions and alternative viewpoints, are no different from Boko Haram and ISWAP. Given space and time, they will take our nation down the same path of destruction.”

From the above, there was nowhere that the Speaker mentioned the name of any group. What was conspicuous in the Speaker’s speech was the focus of the activities of MISCREANTS AND CRIMINALS, and its effect on the country.

The Speaker never condemned secessionists or compared them to terrorists.

As a matter of fact, the Speaker is not alone on the concern about an apparent emergence of a band of miscreants and criminals as different patriotic Nigerians have expressed similar concerns and even condemned the act of maiming, killing, destruction of property and other criminalities perpetrated by the masqueraders.”

Read the previous press release below;

…says House ready to do more despite successes recorded

The Speaker of the House of Representatives, Rep. Femi Gbajabiamila, has said that all efforts must be made to articulate a political, economic, military and policing strategy to address both the manifestations and root causes of the emerging security threats in the country.

Gbajabiamila noted with concern, how some “miscreants and criminals masquerading as separationist activists have emerged to wreak havoc, take lives and commit economic sabotage against fellow Nigerians and the state.”

In an address to welcome members back from their annual recess, the Speaker said the activities of such groups presented a clear and present danger in the southern part of the country, adding that there was no difference between them and Boko Haram as well as ISWAP.

He stated, “These people, in their inclination for devastating violence against fellow citizens, their appetite for the destruction of private property, their disruption of academic activities, commerce, and industry, their propensity for defiling institutions of the state, society and community, their refusal to engage in debate, or to consider the possibility of dissenting opinions and alternative viewpoints, are no different from Boko Haram and ISWAP. Given space and time, they will take our nation down the same path of destruction.

“We know from experience that neither appeasement nor overwhelming violence alone will work. We have been down this road before; we know what the consequences of inaction can be. We also know that we cannot afford to be reactionary in our approach. This is the time to convene our best efforts to articulate a political, economic, military and policing strategy to address both the manifestations and root causes of this emerging threat.

“Let nobody be under the impression that there is a political opportunity in exploiting this moment. This is a time for statesmen to act beyond the petty considerations of politics, to do the hard things and achieve greatness.

Gbajabiamila said the House had rightly focused its “national security concerns on the machinations of extremist insurgents who seek to remake our world in the image of their discredited theocracy and bandits who maraud and terrorise whole regions for profit.

“Insecurity remains an overwhelming threat to all our nation’s people and a hindrance that further delays the attainment of the critical development objectives necessary to put our country on the path to peaceful prosperity.

“Therefore, the 9th House of Representatives will continue to take action as required to address statutory deficiencies that limit the ability of our national security apparatus to respond effectively to the myriad manifestations of insecurity in our country.”

The Speaker said despite the passage of several important bills by the House, some of which had been assented to by President Muhammadu Buhari, the House was ready to do more as that was part of the reasons members were elected.

He listed some of the important bills passed by the House to include the Petroleum Industry Bill, which is already an Act of Parliament, the Electoral Act (amendment) Bill, the Companies and Allied Matters Act, the Finance Bill, the Deep Offshore & Inland Basin PSC (Amendment) Act, among others.

“Already, in this 9th House of Representatives, we have done a lot of what we said we would do, and we have made giant strides towards keeping the promises we made to the Nigerian people in our Legislative Agenda. Yet, with every new accomplishment, we confront the unavoidable truth that our work is not nearly done, and the cares that concern us and animate our governing efforts have not been met.

“But rather than be discouraged, we draw inspiration from the things we have achieved, we learn the lessons from the times we tried and failed, and we endeavour with each new day and each new effort to do better than our previous best. In this way, through our individual and joint efforts, we will ensure that in the final judgment of history, it will be said that in the time we had, we strived, and we kept the faith to the best of our abilities” , he told his colleagues.

Gbajabiamila commended his colleagues for their commitment and dedication to the work of Parliament, which he said made it possible for the House to record such achievements in two years.

He said the National Security Summit organised by the House led to the introduction of some key bills and urged the relevant committee chairmen working on them to “act quickly and conscientiously to bring those bills to the floor as soon as is practicable.”

He also said the House would follow through to ensure the implementation of the recommendations of the security summit submitted to President Buhari.

On media reports that tend to measure the performance of lawmakers based on the bills they sponsor, Gbajabiamila said: “Often, Members are most effective when advocating for their constituents in the arenas of government where decisions are made. They fulfil their role in the Committees when their measured contributions help to ensure that Bills are of the highest quality and solve the intended problems.

“Legislators also honour their mandate when through meticulous oversight of public spending and incisive questioning of public officials, they ensure that government resources are efficiently utilised to meet governing objectives.

“Therefore, reducing the sum of a legislator’s contributions to the number of Bills sponsored is uninspired journalism that reveals a fundamental misunderstanding of the legislative function and the role of members in ensuring that parliament delivers on its objectives to the Nigerian people. It is an unhealthy practice, and it should not be encouraged.”

He said the House Committee on Health Services would soon present the report on the Infectious Diseases Bill, noting that, “I sincerely hope that our debate this time will be a marked improvement from what came before.”