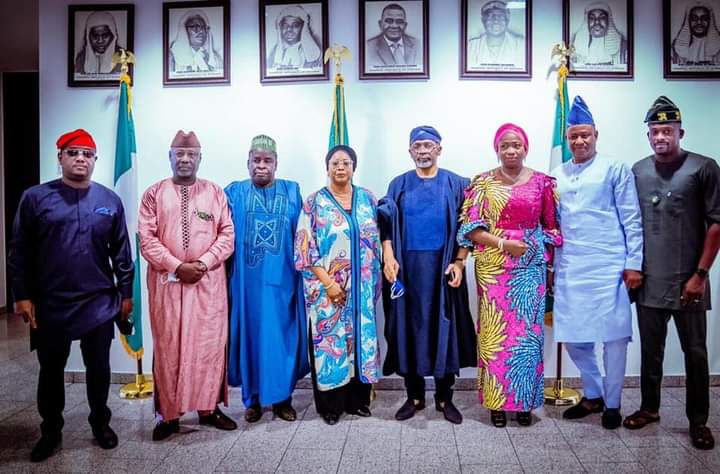 The Speaker of the House of Representatives, Rep. Femi Gbajabiamila, has assured that the Green Chamber would work comprehensively on the issue of Diaspora voting.

He said being a constitutional matter, the House would be very thorough in the process of working on the Bill seeking to empower Nigerians abroad to vote during the country’s elections.

Gbajabiamila spoke on Thursday while receiving the management of the Nigerian in Diaspora Commission (NiDCom) led by its Chairman/Chief Executive Officer, Abike Dabiri-Erewa in his office.

Noting that the issue of Diaspora voting has been on the front burner for a long time, the Speaker said it requires a constitutional amendment, as “…the constitution talks about those who reside in Nigeria.

“Since the Bill is before us, the constitution amendment will allow us to draw up a detailed, comprehensive law. It’s going to be tough and complicated because we are still having election issues even within, but Nigerians abroad are not any less Nigerian than we are.

“We will deal with all the issues and hopefully harmonize with the Senate when it’s time for harmonization”.

Gbajabiamila expressed satisfaction with the concept behind the +600 Nigerians in Diaspora Icons Compendium compiled by the commission, saying “This is very exciting; what it does is, it encourages Nigerians abroad and it encourages those that are not there to do better”.

Though he sought to know the parameter or benchmark employed for those that made it to the compendium, Gbajabiamila also expressed his curiosity over the inclusion of the recent feats accomplished by some Nigerians abroad in the document.

“This just underscores the fact that there are so many Nigerians out there doing amazing things, and we must encourage and celebrate them because if you don’t tell the good side of your story, nobody is going to tell it for you. Bad news sells faster than good news, that’s why I was excited about this,” he added.

The Speaker also urged the commission to consider going beyond the compendium by looking at how to further encourage others on how to strive to be part of those listed in the compendium, while assuring NiDCom of further parliamentary support to enhance its work.

In her response, Dabiri-Erewa, who had earlier sought the support of the Speaker for Diaspora voting, disclosed that the commission is set to organize a Diaspora Award in 2022 while adding that though it is a continuous process, the benchmark for those on the list was based on merit for excelling in their chosen fields.

“We believe that in our two years of existence, we’ve been able to justify the reason for setting up of the Nigerian Diaspora Commission. Today, we have a Diaspora policy that gives the country the short, medium and long-term plans to fulfil the issues as they affect the Diaspora,” she said.

Saying that though the government is keen to engage Nigerians abroad due to their resourcefulness, Dabiri-Erewa, however, expressed happiness that the new generation of Nigerians in the Diaspora are equally eager to engage the government for the development of the country, citing the huge remittances they make yearly to the country.

The highlight of the visit was the presentation of a compendium of 600 patriotic Nigerians who have taken over fields they are into abroad as well as the Nigerian Diaspora Policy and the Commission’s Newsletter.