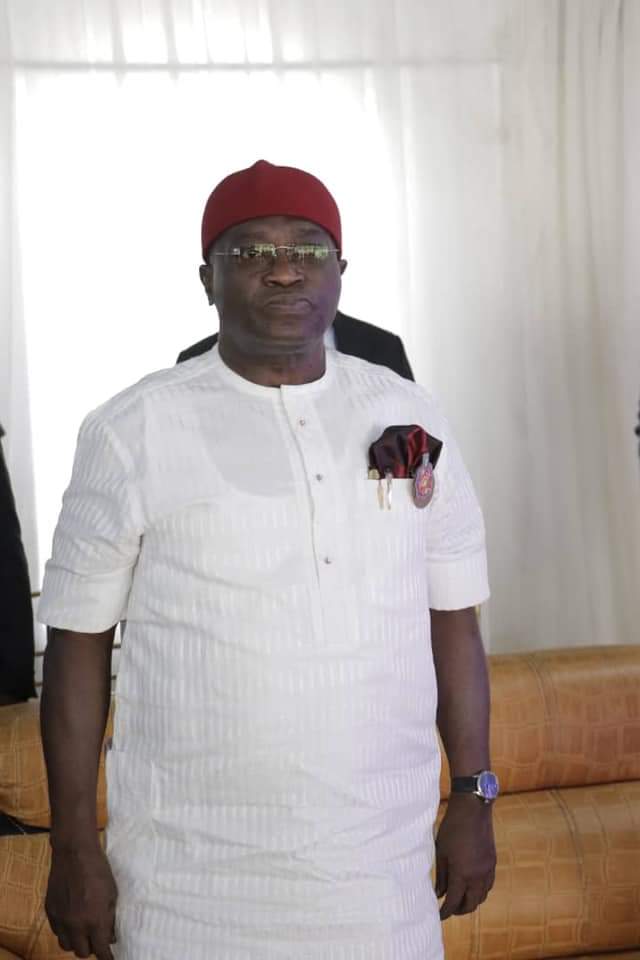 Property owners in Aba, the economic and commercial center of Abia State, under the umbrella of Aba Landlords Welfare Association, have reaffirmed their support and confidence in the Dr Okezie Ikpeazu-led administration to continue to improve infrastructure in the city and across the state.

In an address presented on behalf of the landlords’ association during a Presidential Luncheon held at the GIA event center in Aba on Tuesday, the President General of the association and former Deputy Governor of the state, Rt Hon Eric Acho Nwakamma, extolled the Governor for his giant strides in the renewal of the city especially in the area of road infrastructure, support for SME development, Healthcare, security and education.

“We are by this gathering re-emphasizing our support to your administration. Your administration has recorded huge development in different sectors of the state and we are solidly behind you.

“We want to encourage you to continue with the numerous road projects you have embarked upon in the state, particularly in Aba’, he concluded.

Responding, Governor Ikpeazu thanked the landlords for their support, and promised that he will continue to work hard in order not to disappoint those who support and believe in his government.

“I made a commitment to serve; I have come to serve. We will step up on security this festive period to enable our people enjoy a hitch free celebration.

“We have invested much in the health sector to alleviate the sufferings of the vulnerable in our society especially women and children. Our effort is yielding result. So far, going by nationwide statistics, Abia is among the top 4 States with positive result in infant and mortality rate. We have reduced infant mortality rate in Abia by 71%.

“I must thank you for your support to our government. Like I said, my promise is that I won’t disappoint or fail. I will complete all projects we have embarked upon. We have paid the contractor handling Omuma Road ₦400 million to enable speedy and timely delivery. We are also committed to delivering Ohanku, PortHarcourt, Obohia and Ngwa roads.

“For 30years, it was impossible to move from Brass Junction to Port Harcourt Road due to the poor state of Faulks Road; we contracted the best engineers to fix that road, and we will fix it satisfactorily and formally hand the road over to the people of Aba”, he reiterated.

The Governor re-emphasized that Faulks road is an ongoing project; the same goes for Omuma and Port Harcourt Road, and will all be completed soon.

“My commitment is to build durable roads that would outlive my tenure. I promised you in 2015 that we will do roads that will outlive the life of our administration, that is why we adopted the cement pavement technology on most roads we constructed with drainage on both sides to ensure quality and durability. This government will continually uphold quality and we will continue to solicit your support”, the Governor said.

Earlier in his remarks, the Hon. Commissioner for Trade and Investment, Chief John Okiyi Kalu highkighted the numerous achievements of the Ikpeazu-led administration in key sectors of the state including SME development, road infrastructure, trade and investment, security, agriculture etc, assuring that the state has turned a positive corner from where it was before the emergence of Governor Ikpeazu.

In his presentation, management consultant to Abia State Board of Internal Revenue, Mr. Mac Atasie said the state is committed to the full digitalization of revenue collection processes in the State, as this will enable government generate the needed revenue to consolidate on its effort to deliver more dividends of democracy to the citizens. He thanked the governor for the support he gave to the board to drive home the mission.

Mr Atasie highlighted some of the achievements recorded so far which saw a positive leap in the IGR generation of the state. He urged Aba Landlords to own and participate in the process to enable government deliver on basic needs of the city.

The event which was attended by major stakeholders in Aba also featured investiture of members of the BoT of the association by the Governor.