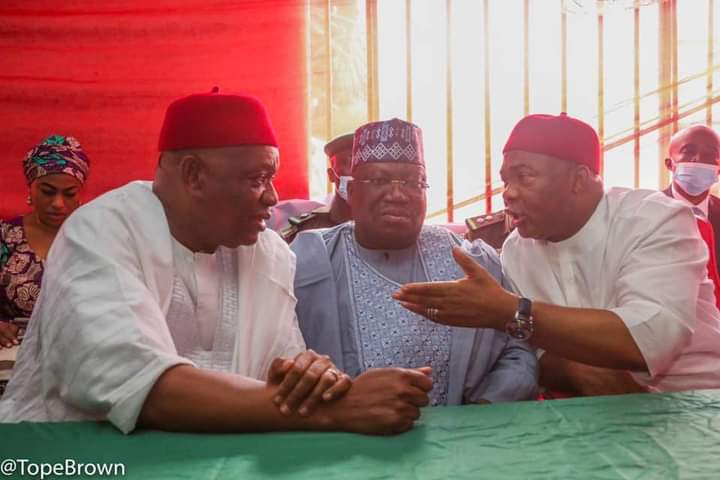 The Chief Whip of the 9th Assembly, Senator Orji Uzor Kalu has urged President Muhammadu Buhari to give Nigerians a Successor who will not only stabilize the country but create equity, justice and fairness.

The Senator representing Abia North stated that North East and South East are the two regions yet to produce a President of the Federal Republic of Nigeria and so it will be right to protect his legacy through the Senate President Ahmed Lawan.

OUK as popularly known disclosed that no amount of money can buy the president of the country while arguing that only cohesion and consensus among regions can produce a president.

“The earliest Nigerians and presidential aspirants understand that no amount of money can buy the president of the country, the better for everyone.

It is only cohesion and consensus among the regions that can produce a president. If you throw in money, the majority of the electorates will collect the money but still vote according to their conscience.

I urge President Muhammed Buhari to consider giving Nigeria a man who can give the entire country a sense of belonging;  fix our economy; secure all parts of the country; take education very serious and protect his legacy.

The man Nigerians can trust is Senator Ahmad Lawan.

Picking Ahmad Lawan as the consensus candidate of the APC will heal and stabilize the country as it is the closest to equity, justice and fairness.

I strongly believe that the fairness Nigerians need is to produce a president from the South East of Nigeria. In the absence of the South East, it is the North East.

These two regions are the only ones yet to produce the president of Nigeria and since the opposition has gone North East, it is ideal and wise that the APC go North East.

I am sure Nigerians will not waste their votes on any candidate that is not from the two regions in the next year’s general elections and following years.”

As the APC convention draws nearer, President Buhari had urged Governors to show reciprocity as he has allowed them to choose their successors, he should be allowed also to choose a successor.

Senate President Ahmed Lawan, Vice President Professor Yemi Osinbajo, former Minister of Transportation Rotimi Amaechi and others are among the aspirants for the 2023 presidential election.