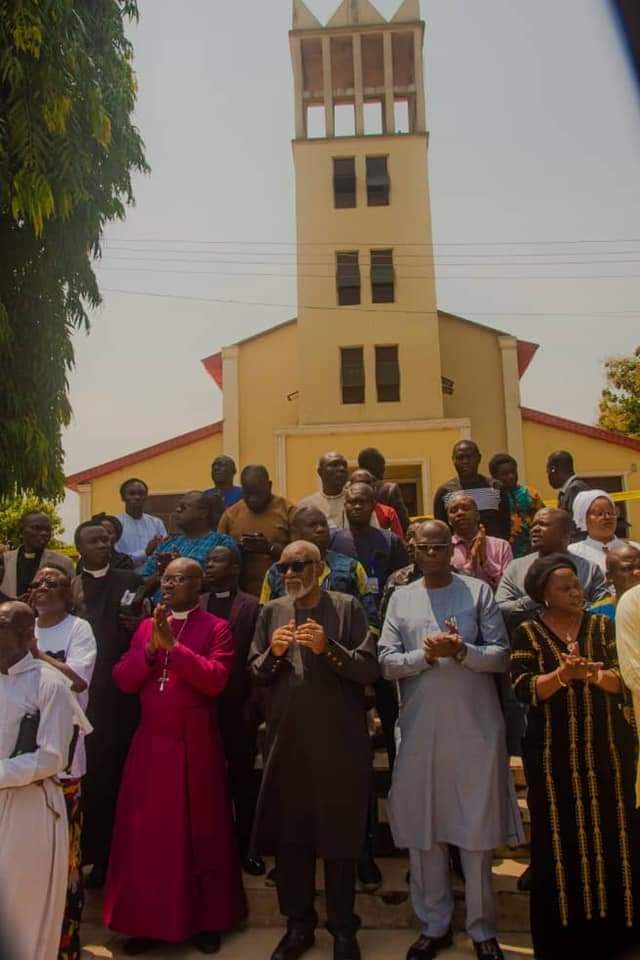 Ondo State Governor, Arakunrin Oluwarotimi Akeredolu, SAN, on Sunday said that the Southwest and the state, in particular, can not be conquered by the enemies of the people under any guise.

Governor Akeredolu stressed that the dastardly acts committed in Owo was targeted to create fears into the mind of the people.

The Governor noted that he will not be silenced by the cowardly acts of the terrorists who killed children, women and unharmed worshipers at St. Francis Catholic Church, Owo last Sunday.

Arakunrin Akeredolu spoke at a special interdenominational prayer service organised by the Christian Association of Nigeria (CAN) Owo Chapter, and held at the premises of the St. Francis Catholic Church where 40 worshipers were killed.

The Governor also visited the Federal Medical Center and St. Louis Hospital, both in Owo to check on the survivors of the attack on admission.

He was accompanied to the church service by members of the state executive council led by the Chief of Staff to the Governor , Chief Gbenga Ale.

The prayer service was also attended by the Bishop of Owo Anglican Diocese, Dr. Stephen Fagbemi; the former General Superintendent of CAC worldwide, Baba Daniel Oloye; and several other men of God who led prayers.

Governor Akeredolu, who described the attack as painful, assured that efforts will be geared towards strengthening the security in the state and across the Southwest.

The Akeredolu equally encouraged all places of worship to install CCTV cameras and engage local security men to further provide security in their premises.

In his sermon, Bishop Fagbemi, lauded Governor Akeredolu for providing leadership, saying since the sad incident happened the Governor’s continuous responses and actions have been unique and commendable.

He also lauded the Governor for his efforts in providing security for the protection of lives and property of the poeple of the state through the establishment of Amotekun Corps.

The Bishop expressed shock over the Owo attack, saying church of God should be a place of safety.

He, however, urged Christians not to entertain any fear, saying God will continue to be with them and give them victory.

According to him, despite the fact that some people have allowed themselves to be used by the devil, Jesus is still alive and will continue to protect and be with His poeple.

Bishop Fagbemi prayed God to expose the killers of the worshippers and their sponsors.

There were intercessory prayers for the the victims of the attack, Owo town and the state at large.