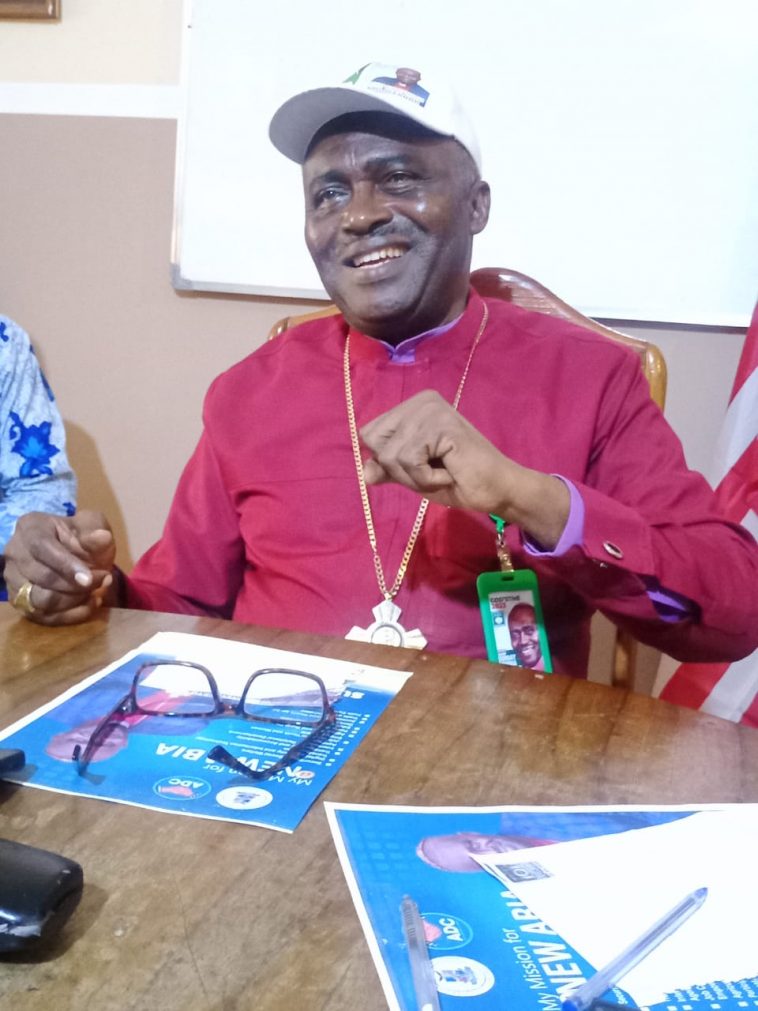 The candidate of the African Democratic Congress, ADC, Bishop Sunday Onuoha has stated that indigenous people should be involved in the fight against insecurity, especially local hunters to peruse and scout the forests in the State.

Speaking at a press conference on Monday, the owner and founder of Vision Africa Radio 104.1FM blasted the South East Governors on launching Ebubeagu without equipping it to strictly attack the insecurity ravaging the land.

He bemoaned the fate of Abians who travel through the Isiukwuato-Isuochi road despite the high rate of kidnapping and killing that happens there.

“Young people are running to the city because they are afraid of the people who have taken over our forests. Why can’t we use local people to protect our land? A visitor cannot protect our land. We must create and equip indigenous people to defend our land. The governors launched Ebubeagu but what we are seeing is no longer Ebubeagu but Ebubeewu. At what point did the people who occupy the forests in Isiukwuato, Isuochi and others occupy the place? The governor is the chief security officer and that’s why he was elected to protect the lives and properties of the Abia people.”

Speaking on his ambition to be the next Governor of Abia State, the former Special Adviser to former President Olusegun Obasanjo, who hails from Okai-Item in Bende Local Government Area of the State revealed that it was expedient for men of character to come into governance instead of leaving it to charlatans who do nothing but amass wealth for themselves.

“The question to ask is ‘tell me what you have been doing. Ask the candidates what they have been doing to be able to know at they can achieve if elected.
If we are talking about insecurity in the State, this is something that can happen and should be done. You can’t travel from Isiukwuato and not risk being kidnapped. This is planting season and people no longer feel free to go to the farm. You can’t risk women going to the farm for fear of being raped by idiots. There will be famine if we continue like this. Unless men of character and religious leaders lead the country, we will be ruled by idiots. I want to see governance as God’s own hope for the country. Women at home manage the Commonwealth of the nation and that is politics. The problem we have in Nigeria is that our Commonwealth is wrongly distributed to a few wrong people. I joined the ministry at 18 and I’m 58. I’ll carry out my activity with the fear of God as a clergyman. Abia State has been governed by Orji Uzor Kalu, a civil servant Senator T.A Orji and Educationist Dr Okezie Ikpeazu but added to my qualification, I am a man of God. We have Nsulu village. Nothing is happening in Nsulu village when we can nurture and build all these to build the State. Aba is locked up. Why can’t we open up Aba? Aba is shattered currently. I remember when people from Cameroun and other countries troop to Aba to buy wares. I am transparent and will ensure that transparency is functioning when I get elected by 2023. The problem we have is that we cannot survive in isolation. There must be a locally grown economy apart from the allocation from Abuja. We have agricultural settlements in Abia State but we cannot create or improve the economy through palm produce.”

Bishop Onuoha reiterated that security was the first step in improving the economy of the State.

“We must secure the State. It is only insecurity that will make people go home early to produce more children. When the place is secured, nightlife can be restored and people can move about freely.”

Tackling the federal government on how it has handled the country, the Bishop said, “President Muhammadu Buhari underestimated the problem he inherited which is why he has performed poorly. In Abia, I’m going to equip traditional rulers, local hunters and vigilantes to secure the land. We must declare a state of emergency on insecurity. The criminals do not know who is Hausa, Igbo and Yoruba when they kidnap or maim individuals.”

On the issue of approach to governance, the Global Peace Award recipient made it clear that the cost of governance must be reduced to effectively provide for the people.

Meanwhile, a few days ago Governor Okezie Ikpeazu inaugurated a Special Security Committee for Umunneochi Local Government to stamp out foreign elements who have been a threat to the people of the State.