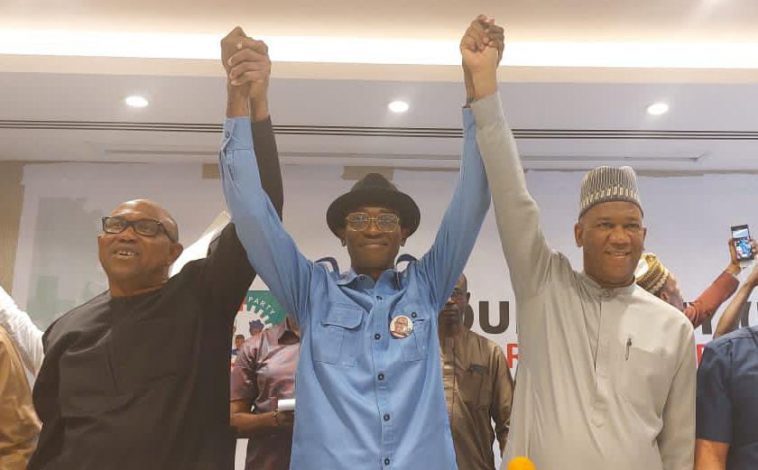 At the formal unveiling of Dati Baba-Ahmed, running mate of Peter Obi, Presidential Candidate of Labour Party (LP) in the 2023 elections, Baba-Ahmed has given the reason why he accepted to team up with the former Governor of Anambra State.

Speaking in Abuja on Friday, Baba-Ahmed said he accepted to be Obi’s running mate because he believes in his capacity to make Nigeria live up to its billing.

He added he also trusts that Obi would not mismanage the nation’s wealth, adding that the Labour Party’s outing as Anambra governor lends credence to that.

The Director-General of the Peter Obi Campaign Organization, Dr Doyin Okupe, who has been a Vice Presidential candidate placeholder, stepped down on Thursday.

His resignation was to pave way for the substantive running mate from the northern extraction to balance the geopolitical and religious considerations.

The LP entered into merger talks with Senator Rabiu Musa Kwankwaso’s New Nigeria Peoples Party, (NNPP). However, the talks collapsed due to the inability of the parties to agree on who would be the eventual flag bearer if the merger arrangements had scaled through.

Obi’s candidacy has received massive acceptance across the country, especially among the youths and has metamorphosed into a campaign known as the #Obidient Movement with the slogan: #TakeBackNaija.

He was a member of the House of Representatives between 2003 and 2007 and was elected Senator for Kaduna North, in Kaduna State, in April 2011 running on the Congress for Progressive Change (CPC) ticket, with a remarkable record for sponsoring important bills and motions in a short time.

In 2015, Baba-Ahmed was appointed as Chairman of, the Board of Trustees (BOT) of the National Youth Service Corps (NYSC) Hope Alive Foundation, which campaigns for the post-service economic survival of corps members who suffered permanent disability during service.